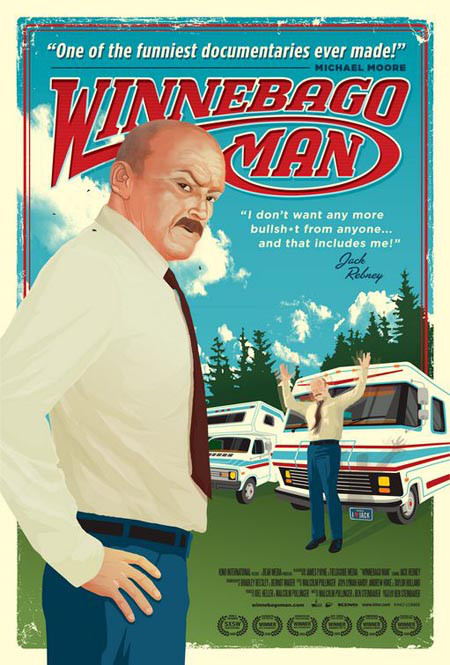 If you don’t know who Jack Rebney is, first of all — shame on you. Second of all, shame on you. And third of all, good news: it won’t be hard for you to find out who that is. A quick YouTube browsing will instantly pull up a five-ish minute video clip that made the guy an overnight internet sensation.

To some degree, we are all searching for it for ourselves — a way to earn attention from more than just one person at a time, a way to build an audience. We celebrate our daily lives through Facebook, Twitter, blogs and a whole host of other social media platforms. Whether its pictures we take, photos we share and comment on, or things we write or create we are more often doing things to make our presence known and felt in some way, shape or form. Existing and socializing in a place that doesn’t really regard the construct of rules and limits — the fruit is just there for us, for the taking.

But what happens when we do something that unintentionally brings unwanted attention to us? Do we recognize it, or embrace it? Would you?

If you think that the tables would turn, it shouldn’t be much of a surprise to learn that the subject of both the much-celebrated ‘World’s Angriest Man’ video clip and the documentary Winnebago Man wanted to get as far away as possible from the marks he unwittingly (and obscenely) left behind five years ago.

Unfortunately for Rebney he left quite some impressionable marks, inadvertently and deeply ingraining his name in the ragged cultural fabric that is YouTube and the like. Though it wasn’t the original concept, a sensationally humorous video compiled of a single day’s worth of outtakes created the impression that Rebney had just had the worst day of his life on the job. He was henceforth Googled as ‘the World’s Angriest Man.’

In the years immediately following the viral video, director Ben Steinbauer became determined to locate the man and ask him necessarily sensitive questions in an effort to gauge how this particular internet ‘celebrity’ was faring. Though it’s not exactly clear whether Steinbauer initially did this to form a larger study of all internet sensations who we never see or hear from again, or whether he had an interest in meeting this one particular guy — the results that Steinbauer found are undeniable. The video has had at least some impact on the way the man has led his life afterward, and in that way, it confirms the theory that one man’s entertainment is another man’s suffering.

Rebney has since secluded himself to the top of a mountain in northern California, and initially presents himself as a kind, soft-spoken man, a night-and-day difference from his (other) on-camera personality. As the documentary continues, Steinbauer’s first visit with Rebney turns out to be a bit of a false impression and it becomes clear later that the former salesman and journalist has his own agenda. Understandably, he didn’t want to be remembered for the video he’s featured in, and wishes to set the record straight with Ben and company. Fascinatingly, the grouch was once a mainstream news reporter who, having grown tired of that racket, switched to auto sales where he remained until the video surfaced.

Winnebago Man is both an experiment and a hoax. It is experimental in that we are given the same perspective as the young director. We often stand alongside the director as he chats with this eccentric older man. Most of the time the director knows about as much as we do on the subject and what is filmed is being filmed without rehearsal. The events contained within lack much of a set-up; there’s a sense of invasion of personal privacy in our wanting to keep watching, our need to get closer to finding out who this guy really is.

So how is it a hoax? At the same time we are wanting to know more,  it’s this same quest for knowledge that will destroy the illusion that existed when we didn’t know him as anything more than a foul-mouthed, fly-hating, accoutrement-mispronouncing salesman. Going behind-the-scenes, as it were, created a real connection to this person, and we no longer can afford to look at him as that guy who said f**k a whole lot in 30 seconds. Dressed in a suit. And sweating. Because here’s the kicker: Jack Rebney’s an actual human being. . . with actual opinions on issues more significant than his ability to swear up a storm. That’s how he’d like to be remembered, and he’s going to let everyone know that.

Perhaps inadvertently as well, Steinbauer gave Rebney a platform from which he could voice his concerns on matters such as the way Dick Cheney had bankrupted America or that the existence of Wal-Mart is a complete disgrace, among other things. With these bits and pieces we now see him as a real person and not just some blustery, cantankerous personality captured in less than five minutes of videotape. He may still be funny in his vehement anger towards Congress, but that illusion is indeed gone. Steinbaeur even convinces him to attend a screening of the famous clips at a Found Footage Festival in San Francisco, where he will learn to embrace his ‘fans.’ For the second time an illusion is shattered. This time it’s for the source himself, who has now been confronted with the reality of his situation. Somewhat charmingly, he can only awkwardly speculate as to what his appearance at this festival really means, as well as to what it means to the people he once thought were wayward, misled individuals.

Whether or not you feel like it’s a big deal that a camera crew went to certain lengths to track down the R.V. salesman isn’t as important as the fact that this viewing experience exists. Since you can easily find the entire documentary online and download or stream it for your viewing pleasure whenever you like, consider it all coming together full circle. There is. . . no escape. . .

. . .neither from goddamn jackass flies nor from the sensationalized world.

Recommendation: As enlightening as it is entertaining, Winnebago Man is a well-crafted documentary that ruminates on the state of socializing on the internet and the long-term effects that video has on their subjects. For anyone who has not seen the footage yet of the swearing salesman, you are likely not the target audience for this documentary as I believe you have been actively avoiding this stuff for awhile (you’re not to blame). If you have never heard of this documentary, I sincerely recommend that you give it your attention sometime.

Quoted: “When I say it, and listen to myself babbling, that’s really the human condition, is it not? Right there, in simple terms, what we’re doing is we’re. . .we’re facing an enormous amount of adversity and it seems disastrous that we don’t let ourselves say what we really feel, what we truly feel. And I’m happy to say that I take some degree of pride in the fact that when I’m faced with that, and when I’m faced with it today I say exactly what is on my mind.”