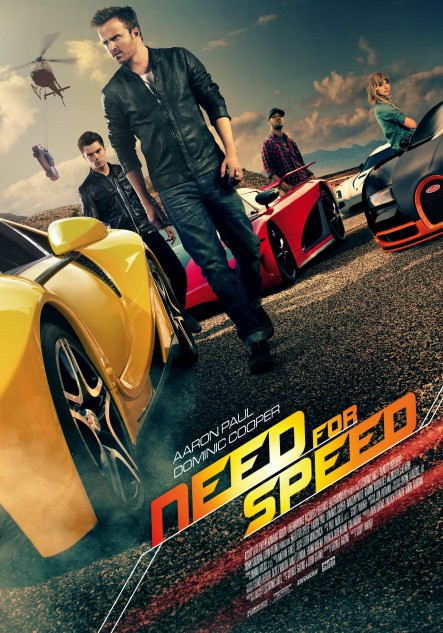 At the very least, Need for Speed has a need for tighter editing. One lap around this fast track will take you a little over two hours, a gratuitous length of time for a movie that centers around a videogame about street racing. The other obvious question is what, if any, need is there for this film to exist?

Many of us have played the game(s) over the years and hopefully those who spent time with it/them enjoyed doing so. The playing experience, though hardly revolutionary, was unique enough to be remembered fondly. While it did share traits with the superior (and more challenging) ‘Gran Turismo,’ ‘Need for Speed’ identified itself by offering up more cars as eye candy than any other game. Visual effects were pretty impressive (at the time) and the combination of dream cars with glistening sunset-dappled race courses while being pursued by the police was a pure delight.

Then in 2013 it was announced that a full-length feature film adaptation of this E.A. Sports creation was going to hit theaters in the spring of 2014. Reaction to this news came in the form of simple, one-word responses: “What?” “Huh?” “How?” “Why?”. . . .among other, more choice words. It was a move not designed to increase the game’s popularity. This was a complete gimmick designed to destroy what little was left of Hollywood’s credibility when it comes to talking about what they choose to adapt and not adapt.

Besides driving multi-million-dollar vehicles in the tropics, the greatest appeal of the gaming atmosphere was having this anonymity about you when driving. Your car was the main character; you as the driver remained unseen, unnamed and unexplained. You could have been a convict, you could have been Mother Teresa. It didn’t matter, and that was what made the generic feel of the game effective. Anyone could feel empowered.

By slapping a face on the franchise in the form of the quite likable Aaron Paul from a T.V. show you’d have to be crawling out from under a rock in order to be unaware of, its clear the studio and director Scott Waugh didn’t want to go the Mother Teresa route. Instead, it was decided that Need for Speed should be a sleek and shiny, adrenaline-fueled adventure that capitalizes on including as many top-tier automakers as possible while also providing the thrill of the chase element that was established by its source material. Thankfully, these are things that the film does not lack. However, what is lacking is a good reason why this wasn’t made to be a direct-to-DVD release.

At its heart is a story of vengeance. When a New York street racer, Tobey Marshall (Paul) loses one of his friends in a terrible accident during a romp through the streets he is framed for murder by his rival, the perfidious Dino Brewster (Dominic Cooper), and sentenced to a two-year stretch in prison. Upon his release Tobey is not only a little ticked off that his friend is dead (and that he was set-up), he has also painted a target on the back of Dino’s head because he knows the truth about the way things went down that fateful day. He’ll settle his anxieties by way of an extremely unlikely road trip across the country in a vehicle he was requested to build by none other than the snake himself, Mr. Brewster.

A silver-and-blue striped custom Shelby Mustang puts in the film’s best performance as Tobey and his roadtrip buddy, a British car enthusiast by the name of Julia (Imogen Poots), hurtle through changing scenery in Hollywood’s awful attempt to capture the experience of driving in the videogame. Wandering direction, along with problematic (possibly nonexistent) editing stages, create one long, loud, and laborious experience that could stand to be at least forty-five minutes shorter. Or upgrade the rating so at least the conversations might be more realistic.

In defense of the cast, they shouldn’t bear the brunt of the criticisms. Characters that inhabit this world aren’t well-defined — at all — but by the same token they are neither unlikable nor played with indifference by actors who seem committed to such a generic affair. In fact, Scott “Kid Cudi” Mescudi as Benny serves as welcomed comic relief when the script stalls. It wouldn’t be a stretch to imagine him improvising most of his lines. He’s easily the most watchable. . . . .apart from this film’s token girl. And despite Paul’s character being the Chevy Impala of this adventure, Tobey is worth rooting for. Sort of.

Where fingers should be pointed to the most is none other than Hollywood’s (probably) least-hired screenwriter, George Gatins. His involvement with a short film titled My Wife is Retarded and what sounds like a reliable full-length feature, You Stupid Man, is how I’d like to bow out of this review. I’ll leave you with that tidbit of information as you make up your mind over whether or not to see an unnecessary film.

Recommendation: Need for Speed misfires on virtually all cylinders. Despite me refusing to believe it would be anything more than crappy, I still came away disappointed. And irritated. The product has several other problems I didn’t even touch on, but in the spirit of not completely overstuffing one review, I called out only the major ones. If you were ever a fan of the game may I suggest you leave your memories of those years in tact by avoiding seeing this at almost all costs. (However, if you have a projector malfunction like the one I experienced before this one got underway, and you find yourself with a free ticket, this movie might be a good way to use that guy.)

Quoted: “They took everything from me. I do not fear, for you are with me. All those who defied me shall be ashamed and disgraced. Those who wage war against me shall perish. I will find strength, find guidance, and I will triumph!”

19 thoughts on “Need for Speed”