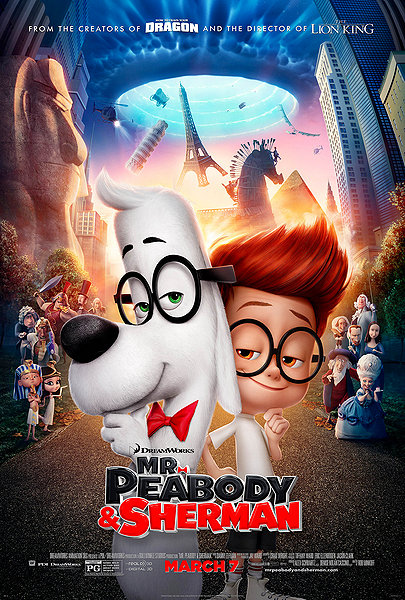 Here’s a newsflash: Rover is a really boring name for a dog. You should get creative and name yours something crazy and endearing, you know, like Mr. Peabody. Or whatever suits your fancy.

Put thick nerdy glasses on it, too, if you want. Just don’t expect the pup to transform itself into the brainiac, time-traveling father-figure that audiences will come to know and love in Dreamworks Pictures’ Mr. Peabody & Sherman. Yes, it is possible for old dogs to learn new tricks. It’s probably not even that much of a stretch to imagine a really good trainer being able to teach a dog a thing or two about algebra, perhaps even physics. We’ve managed to make them speak our language. . . What’s next, dogs graduating at the top of their classes as valedogtorians? (I can’t take credit for that pun, it’s in the movie.)

All of this is still less ridiculous than the concept of a dog raising a child, yet these are the kinds of possibilities we are presented with in this fanciful adventure comedy from the director who brought us The Lion King.

Sherman (voice of Max Charles), abandoned by his parents at a very early age, was discovered in an alley one rainy night by a passing dog, a dog who had never managed to find himself an owner and was getting very lonely. Apparently feeling in a generous mood, a federal judge granted Mr. Peabody the right to take care of and raise the child. This is a responsibility he would take extremely seriously, making sure Sherman grows up to be an intelligent, sensible boy who stays on the straight and narrow. He wants Sherman to be just like him, except without the paws.

Because he looks after the boy so intently, his childrearing skills have caused Sherman to be a bit of an oddball. During his first day at school he is teased by a mean girl, Penny Peterson (Ariel Winter) when she learns of his unorthodox upbringing. Feeling cornered, Sherman takes a leaf out of his father’s book and sinks his teeth into her arm in self-defense, an act that would then draw the principal’s attention and that of a nasty woman from Child Services, Ms. Grunion (Allison Janney). In case any adult in the audience was thinking the same, the movie does indeed address the concept of a dog raising a child. We are left to make up our own minds whether the role reversal works. It is indeed a comical idea, at the very least.

Over the course of 90 minutes this endearing but undeniably oddball pair go on many a wild adventure using what Peabody has called his latest invention the WABAC (“way back”) Machine, a device that allows them to travel back in time to any point in history they want to visit. When Penny and her parents come over for a dinner one night in an effort to patch things up between the two kids — thus eliminating the need for Child Services’ intervention — Sherman disobeys his dad’s orders to not show anyone the time travel machine, and they shoot back into the days of ancient Egypt, where the fun jumps into hyperdrive.

Meh. That’s a bit of an exaggeration. But this moment does mark a beginning, a point in time where later we might actually remember what was attractive about this movie. The general set-up and story is fairly generic and nothing that will be chatted about excitedly afterwards (unlike some as of late that have become the trendy thing to talk about). However, the time travel element of Mr. Peabody & Sherman diverts our attention away from the conventional aspects more often than it highlights the weaknesses. A pit-stop in Renaissance Era-Italy serves as a highlight, where we get to see the “real” behind-the-scenes of Da Vinci’s painting of the ‘Mona Lisa,’ watch Sherman testing out the very first airplane prototype, and experience the first of many little arguments Sherman has with Peabody, who seems to be going from protective father to overprotective nuisance with each scene that passes.

All while this epic trek is happening we are trying to get back to the original timeline, before Sherman makes the mistake of showing anyone the WABAC, and just after the Peterson’s arrive for dinner. Peabody hopes that all tragedy can be avoided if they can just make it back home safe and at the right time. Of course, if they jump back to that time they will create their own doubles, which will prove to be problematic when it inevitably happens. This is a side effect Peabody had warned of when using the time traveling machine. You can’t blame him too badly, though; he’s a dog that’s basically one-upped Einstein. So there are kinks and flaws in his newfangled contraption, but come on. Stop pretending like this is confusing. . . . .

There is a great deal of heart to it, and even despite all of the interesting scenarios we find our intrepid voyagers getting involved in, the ultimate experience is ironically bereft of the intelligence quota that is suggested by the character of Peabody. A fiercely intellectual animal is stuffed into a movie with fart jokes and lame sight gags as its sales pitch. A good deal of the joke-telling not aimed at kids becomes repetitive and was never very strong from the beginning. But the little ones should find themselves with plenty to do as they analyze ridiculously animated fat people, thin people, famous icons, and of course, the requisite fart jokes and sounds. In essence, it’s nothing like the segment from The Rocky & Bullwinkle Show from the late 50s/early 60s.

If Peabody’s science is meant to be cutting edge, then the product he’s now featured in is a pretty dull blade. Like, plastic knife bad. While the animation is often humorous and perpetually beautiful, this isn’t quite the breath of fresh air as something like (yes, I’m going to have to reference it again) The Lego Movie, where entire families will have something to feast on for the duration; no, indeed this is one for the kids. Apparently they still think you owe them one, even after you took them to that most rare of animated films. 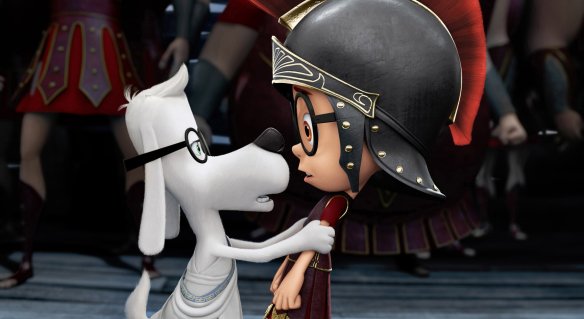 Recommendation: Kids may forget it possibly quicker than their chaperones. Its hardly a replacement for the segment that aired so long ago (titled Peabody’s Improbable History) but also somewhat disappointingly, Mr. Peabody & Sherman doesn’t surpass even modern animation standards as it features rather lazy writing and storytelling. It has an interesting gimmick but the rest is nothing but predictable, even if there is a lot going on. It certainly won’t be the worst idea to take the family to this, but it’s pretty likely there’ll be much better family outings as the year progresses.

Quoted: “All sons have had some issues with their parents. Odysseus was going to be left stranded at home. Ajax was going to be in a Greek chorus. And Oedipus. . . . you do not want to go to his house for the holidays! You want to talk about awkward. . .”