Hey guys. . . .what’s happening? Here’s another T.P.S. report for your reading pleasure. As a blogger, I have a fair amount of time to get what I have to say out to you, my loyal and lovely readers. I can slack off whenever I please, bust ass when I feel like really getting stuff done in a timely fashion. There are very few rules and regulations governing my blogging life. Most importantly of all, I have no bosses looking over my shoulder whenever I write something. (If I find a more substantial job soon, that won’t always be the case. But hopefully my future editor will be cool.) I, forever the idealist, want to petition the concept of working for a living, though. Anyone who’s ever had the “joy” of being stuffed into a cubicle for 8 straight hours Monday through Friday can’t deny the inevitable sense of feeling like a slave to their desk/computer after a certain amount of time. I’m not saying I have the boldness to do something like this week’s main character does but I can empathize with how he’s feeling. I honestly don’t know who can’t with this week’s edition of TBT. 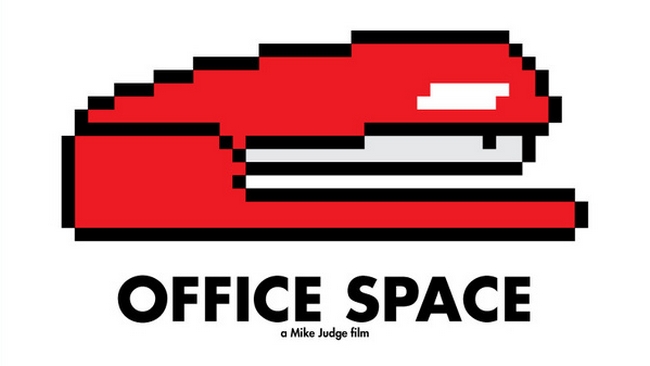 A comedy steeped in the doldrums of being a cog in the corporate engine, Mike Judge’s Office Space became a sensation in a hurry. It’s uncanny ability to dramatize the monotony of the work day is pretty much unmatched by any film since, and not only that, its sense of deadpan humor operates on such a high level it’s become one of the most quoted films of all time. It has its feet firmly planted in reality so most of us can relate, yet it also contains scenes that seem to come straight out of a dream we all have had about that time we quit in spectacular and dramatic fashion. All of this blends together to form one of the most satisfying and re-watchable comedies of the ’90s. And yeah, possibly of all time.

There’s no secret to its success. Judge’s film is so reliant on its criticism of the work place that it almost could be considered a snuff film. However there’s a universal appeal to the despair Peter Gibbons (Ron Livingston) and his coworkers Michael Bolton (David Herman) and Samir (Ajay Naidu) experience working as low-level programmers at the soul-sucking entity that is Initech. Filled with an assortment of memorable and quite frankly bizarre characters, the story is one many have always looked towards for comfort in their ironically similar routines as they split their time between work, watching films and making sure they have enough copies of the T.P.S. reports.

Peter is an increasingly dissatisfied and disenchanted employee at the Houston-based company, and finds his everyday life a chore with each and every passing minute. His girlfriend is a self-absorbed prig who makes him regularly visit an occupational hypnotherapist, his boss is none other than a droid named Bill Lumbergh (Gary Cole’s most iconic role without question), his friends are far too settled into their dull career choices, and his willpower is equal to that of Milton’s I.Q. — exactly zero. There comes a point, however, when enough is enough for Peter, and following a bizarre incident during his latest visit with his shrink, he’s thrown into a state of complete relaxation and mental clarity.

He stops showing up to work after one too many requests for his presence on the weekend; he refuses to answer Lumbergh’s many, many ensuing house calls and voicemails; he finally gets up the nerve to ask the pretty waitress (Jennifer Aniston) working at a restaurant called Chotchkie’s, located very close to his place of work, to lunch one afternoon. Quite simply, one day he just stops giving a damn. He finds a kind of inner peace that gives the viewer a reason to cheer for this otherwise downtrodden protagonist.

The film seems a little cultish in its unabashed revelations of what’s said behind closed doors — it would seem only the most disillusioned general laborer would truly identify with the sudden change in fortune for Peter Gibbons, but that’s not necessarily true. Office Space is written in such a way that a more general audience who appreciates good comedy can latch on to the themes presented. It’s easy to picture software companies or any job that requires employees to stuff themselves into cubicles all day five days out of the week as being joyless, monotonous environments in which spirits are crushed and only feelings like depression and regret stagnate to unhealthily high degrees. Depending on how disenchanted the viewer is with his or her own work experience the lead characters here will seem more or less like heroes.

But no one can deny that the film is an intelligent and refreshingly simple one dedicated to proving that it’s more important to be satisfied with who you are and what you do than it is about conforming to standards and fitting in. That’s not to say everything that occurs is an example one should take from the film and try to apply in a real-world setting. Pulling a Peter Gibbons would most likely result in immediate termination. Approaching a cute waitress during the middle of lunch rush could lead to a slap in the face. . .or a cold shoulder. Not really. But, also. . .possibly yes. Money laundering is a definite no-no.

It’s less about what these people do than about what their actions represent that has made Judge’s pre-turn of the millennium film a cherished production in the eyes of many. So go on, smash a fax machine if you’re having a particularly shitty day. The greatest thing about Office Space is the usage of such simple objects to represent universal truths and experiences.

Some advice for the Bill Lumberghs of the world: if you ever find yourself contemplating taking shortcuts in your duties as it pertains to the well-being and employment status of your workers; if you snatch away our Swing Line staplers as though you were kidnapping our children; if you ever dare send us another copy of a goddamn T.P.S. report; if you so much as rearrange our desks one more time, consider yourself more than fairly warned. The next day you show up you could find your building burning to the ground.

Damn, it would feel good to be a gangster.

Recommendation: The film is one I’m pretty confident every one has seen at some point. If you haven’t, you have just lost some points with me. 🙂 In all seriousness, if you haven’t checked it out yet, you’ll be glad you did.