Catch Me If You Can‘s little brother decides to show its face in 2013, sporting a cool name, a slick, sexy visage and the necessary wardrobe/make-up department to cover up all the acne pimples and skin blemishes its suffering from as it starts to stumble awkwardly into adolescence.

To that end, little bro has turned out to be quite the attention whore as well (if guys can be whores). My, how the previews have hyped this one up; puffed up its chest to the point where one might think if it were pricked by a pin, the entire thing would explode. But the only thing that would rush out — don’t worry, it wouldn’t be all gory and bloody — would be a substantial amount of air. That would be the sound of an ego slowly deflating as the excessive two-hour runtime plods ever onward.

The story of American Hustle is similar to the story of Frank William Abignale, Jr., at least structurally, in that it purposely meanders, it likes to take its time developing, and (here’s some great news) it makes outstanding use of a cast that is to die for. That last quality applies more to David O. Russell’s follow-up to Silver Linings Playbook, considering it has possibly the best one of the year.

Irving Rosenfeld (Christian Bale) is a con man with a hairline not many would be jealous of. His fashion-oriented, equally cunning partner-in-crime Sydney Prosser (Amy Adams) finds the man to be a little physically out of shape but his confidence and mental tenacity far outweigh his belly. Together they con people out of thousands of dollars, posing as art appreciators or collectors. . .or, whatever they are. Getting hung up on those details is not so important. What is, though, is the fact that their good luck of making money illegally eventually will run out, and indeed they get busted by the loose cannon FBI Agent Richie DiMaso (an incredibly fun Bradley Cooper).

DiMaso strikes a deal with the pair, telling them that if they apply their skills to a sting operation in which he’s targeting some of the nation’s most crooked politicians and power brokers, both Irving and Sydney will be pardoned of their previous crimes. They need four major busts, which will include nabbing Mayor Carmine Polito (Jeremy Renner). They soon embark on a wild journey through some of the most politically corrupt and criminally-linked tiers of society that inhabit the streets of 1970s New York City.

While it features a grab-bag of talent, little bro is pretty reluctant to get out of bed in the morning. The opening act drags us deeply into the slightly questionable relationship between Irving and Sydney. But O. Russell realizes we need to have an anchor point somewhere with a cast this large; he attempts to root our emotions the deepest with this only slightly more empathetic duo. But once we are through the first thirty or so minutes, the real fun and glamour commences.

American Hustle seriously benefits from O. Russell’s direction, as he cleverly infuses a substantial bit of humor with some scenes of solid tension and applies it to the entire colorful cast in nearly equal measure. Jennifer Lawrence plays up Irving’s unstable wife Rosalyn perfectly — it’s nearly impossible to think the actress is a mere 23 years old (two years older than my little brother for crying out loud), as her performances, perhaps capped off by this one, are marks of an incredibly matured, seasoned actress. The director’s hand and the talented cast blend for some truly brilliant scenes that make up for American Hustle‘s otherwise rather bland and frankly disappointing story.

After you strip down the fancy clothes, the over-the-top characterizations and lush, elegant settings, what you have left might be best described as a pissing contest between professional liars and cheaters. Who shall come out on top? Chances are, it won’t be the ones most are expecting from the outset. And chances also are that none of them are quite as adept as Frank William Abagnale, Jr., to invite yet another comparison. Unfortunately such comparisons are hard to avoid when the essence of the story is so similar. This may be a more glamorous cast to stick with, but expectation levels are so high with this film that anything less than perfect feels a little like a con in itself.

True that the art of conning is made more complicated here, since it will involve the government (whereas DiCaprio’s character was constantly outlasting and outsmarting it). Still, there’s a lot left to be desired when this one concludes.

American Hustle is nonetheless a pretty fun time at the movies. Reiterating, there are some sequences and moments that shout Oscar potential and there’s no denying each incredibly talented performer here is having a blast with the material. A lot of that can also be pinned down to what they get to wear, though. Brad Cooper’s hair in curlers is downright chuckle-worthy. The banter back and forth between Cooper and Bale is priceless. The last thing that springs to mind when seeing Lawrence here is Katniss Everdeen. Heck, even Amy Adams is decent.

Throw in a couple of silly cameos and you’ve got a little brother that flaunts his swagger so casually you don’t really mind because you know he’s putting it to good use more than you are. 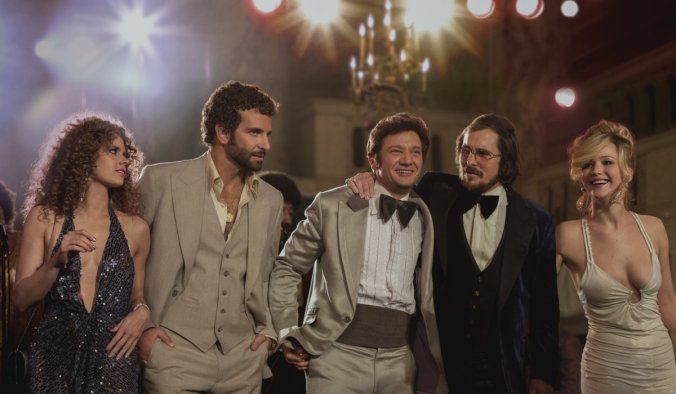 Recommendation: American Hustle is a raucous comedy that is mostly successful in bringing forth the laughs. It’s story is a little confusing at times and it won’t be until the very end that things become clear (if they do at all), but as long as you go in with an open mind and expectation levels at a reasonable height, this should be the fun you might necessarily expect out of all this excess bullshot.

Quoted: “I believe that you should treat people the way you want to be treated, didn’t Jesus say that? Also, always take a favor over money. Effin’ Jesus said that as well.”