Growing up, one of the harshest realities we all had to come to grips with was the fact that jolly ol’ Saint Nick was in fact, not real. But oh boy, is he! He comes to life on the big screen in this knock-out raunch-fest in ways no good little Johnny or Jenny should ever know. . . at least not until they hit puberty. This might be one of the all-time darkest Christmas comedies ever made, and I apologize in advance for the insane amount of gushing that is to come. In an effort to tone that down a little, I want to do something a wee bit different here with this TBT. Therefore, we will have a letter in response to this movie, written by an 8-year-old Tom Little (because, unlike many, I’m not ashamed to admit that that was the age when I finally resigned to Santa being nothing more than my parents’ best-kept secret).

Dear Santa, when did you turn into a depressed, raging alcoholic?

I thought you were supposed to be jolly! Instead what I am seeing here is one, big, fat jerk!!! Actually, you seem to be too skinny to be Santa. And that beard that hangs awkwardly underneath your chin. . . . are you sure you are the real Santa?

When I first saw you in this movie, I didn’t know what to think. Mostly because I was sad. You dashed the hopes of millions of children like me. How could Santa be such a mean, uncaring person — a man who likes to drink more than deliver gifts; a man who, when saying “Ho-ho-ho!” is really meaning something else, I think, because he always says it when he’s around girls. I don’t understand what this means, but you’re not being nice I don’t think.

But not only is there scene-after-scene of you being a grumpy old bugger, but you steal! You are obsessed with fancy, pretty jewelry! Maybe it’s because I am young and don’t understand yet — is this how you give people gifts so easily in one night, you just take things and then give them to others? Can I get a piece of jewelry?  Also, for being jolly old Saint Nick, boy do you swear a whole lot! I don’t think there’s anything weirder to me than seeing you yelling and cursing at all those innocent kids that sat upon your unhappy lap in the mall. Except for one kid in this film, you seem to hate everyone. How big is your ‘Naughty’ list? How small is your ‘Nice’ one? I wonder which one I would get put on to. . .

Don’t you get any joy at all getting to hang out with your elf-friends. . .or midgets? Er, no, I think they are elves. I have never been to the North Pole, so I don’t know what a real Santa’s helper is supposed to look like. All I see you do here is go to bars and say rude things to people — even your short little elf pal who helps you steal stuff from stores you work in. Bad Santa. Very bad.

There’s another really big question I have. Is the lady that’s in this movie who is on the DVD cover putting her tongue in your ear — is she Mrs. Clause? Why is she doing that kind of stuff? Is that some sort of adult secret I don’t know about yet? I have to say, Santa, the way she acts around you kind of makes me uncomfortable. But she must like you because she always is near you and tries to make you feel happy.

Anyways, a lot of what I am finding out about you, sir, shocks me. I do have to say, though, it was nice to see you actually sort of trying to be nice and be a role model of sorts to this one fat awkward kid named Thurman Merman. He reminds me of some of my friends, who get bullied. For some reason, other people think it’s fun to be mean to those around them and make them feel really badly about themselves. But this is one time where you, “Santa,” actually stick up for something. This makes me a bit more happy. You probably aren’t the best role model ever but it kind of looks like you are trying to do the right thing towards the end of the movie.

I hope you eventually do cheer up and start enjoying yourself. You have a pretty special life, and you should make the most of it! You might not like your job but I don’t think a lot of people do. Please stop drinking so much because I am afraid that one day you might crash your sleigh into someone’s roof and get the reindeer all hurt. No one wants that! 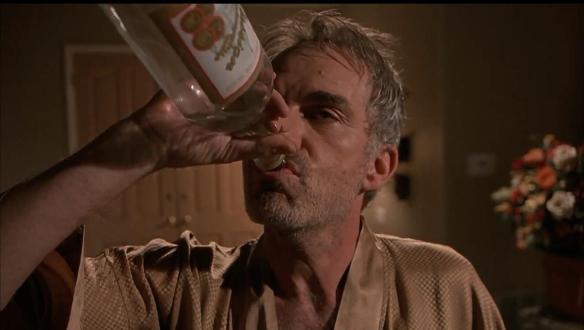 Recommendation: It’s possible this is one of the most sacrilegious films ever made, but if you’re into that kind of thing, Bad Santa makes for gleefully offensive entertainment. Thornton’s performance churns out a line-o-rama that most kids shouldn’t be able to repeat after watching, but then again, kids are hardly this film’s target audience. Understandably viewed by opponents as an unnecessarily vulgar product and maybe even a waste of time, this is one strictly for the cynics.