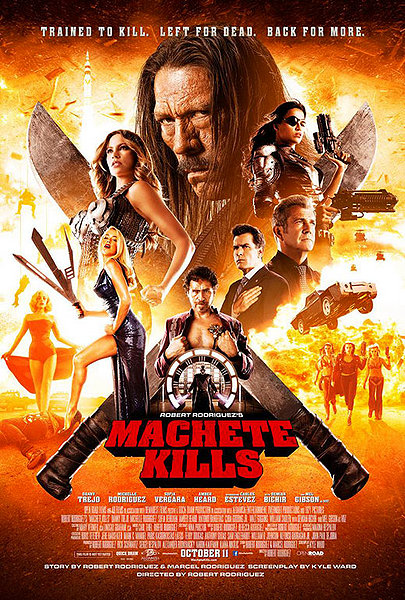 Okay. I’ll go ahead and file this one under ‘Ridiculous.’

But I’ll be sure to leave a sticky note on it as well, with a reminder saying, ‘Not bad if you’re in just the right mood for guns, girls and glory all in one simple, cartoonish and outrageously campy package.’ It’s not exactly a brief label, but this is what’s true of Robert Rodriguez’ follow-up to 2010’s Machete. This thing is incredibly clunky, crude and crass, but oh-so-creative and deliciously dumb.

Seems that with Machete Kills, along with lowering my standards of moviegoing entertainment (I paid $8.75 to see Miss San Antonio, not Mel Gibon. . .or even a Chuck Sheen who’s seemingly undergoing an identity crisis as he’s credited as Carlos Estévez for the first time in. . . well, years), I’ve also gone ahead and broken a long-standing moviegoing rule of mine — to avoid seeing a sequel before getting to see the original first. Seeing that this is a story with about as much substance as a microwaved bowl of Spaghetti-O’s, I figured I wouldn’t be missing much. And, barring the continuation of the “fake trailer” gimmick that Rodriguez has run away with since his Planet Terror portion of Grindhouse, and a couple of characters that were also in the first, my experience proved that to be true.

The film opens with a scene in which Machete (Danny Trejo) and his partner, Sartana (Jessica Alba) are fighting off some baddies and seem to have been successful, when suddenly a masked man appears around the side of a vehicle and guns down Sartana, and then bails, leaving Machete alone and  now even more morbid-looking than he previously had been.

Soon he’s captured by an overzealous Texas sheriff (William Sadler) and is subsequently hung, but once again his body proves to be near-immortal as his neck is too thick to break in the process. Moments later, a call comes in from President Rathcock (Sheen) requesting the help of the ex-Federale agent. The cop reluctantly cuts the big bastard down and he sets off on his mission to save the world, also now saddled with vengeance and heartbreak. What ensues is a journey filled with chaos, extraordinarily excessive bloodshed, women that would likely incur the envy of James Bond, and another appearance from Mel Gibson (yay!). It is all perhaps a bit too much to handle at once.

Not the least of which is Amber Heard in a, shall we say, visually stunning role that is, unfortunately, all style and no substance. Her (read: appreciated) eye candy roles have pretty much all led to this.

Simultaneously a San Antonio Beauty Pageant Queen and a covert agent trained to assist Machete in his mission, Heard’s role is probably the most gratuitous element in Machete Kills. Describing her entirely would reveal too much about this flick, even though spoilers SHOULDN’T be something one should be concerned about with a movie like this — all the same, I won’t ruin it — but I’ll say this: Miss San Antonio, for all intents and purposes, is a microcosm of Rodriguez’ brand of filming (at least, as of late). She’s sexy, obsessed with violence, and her acting is desperately campy all at once, in every frame of the film she’s in. As much as I enjoy her presence, her performance does leave a lot to be desired still. But, how dare I ask for more.

Miss San Antonio’s not left to bask in the misogynistic light of Rodriguez’ blood-spattered world alone, though.

Along his journey, our scarred hero must get past a barrage of blustery characters, including a hostile group of women who seem to be the female version of Hell’s Angels (only without the bikes), headed up by Sofia Vergara’s maniacal Desdemona (otherwise known as the girl in the trailer with guns for boobs). She’s backed up by Alexa Vega’s Kill Joy and Vanessa Hudgens’ Cereza; other notable villains include Walton Goggins/Cuba Gooding Jr./Lady Gaga/Antonio Banderas as El Camaléon/La Camaléon (that’s a whole other story in itself), and Demian Bichir is wildly entertaining as a bipolar weirdo named Mendez.

Not having seen the first movie may almost be an advantage when talking its follow-up. Clearly, it hasn’t performed even half as well as the original. All depending on one’s loyalty to the director’s flare, there’d be surely some level of disappointment after seeing Kills if you were a fan of the first. The film seems to drag by in places which rendered it a much slower-moving hour and forty-five minutes than it should have been with such a star-studded cast; the flaw in its pacing is something that should be unforgivable given the playfulness of the style and tones on display. When the acting is not something you can rely on either, the parts that drag, go by unbearably so.

Fortunately, the climax of the film is suitably amusing and the deaths are more cartoonish than ever. Mel Gibson is disturbingly comfortable in the role of a demented billionaire, hell-bent on worldwide destruction. In some ways, I was convinced this was not really an acting job for him. He just was himself and cameras rolled. (Theories on this can be discussed later.) What worked the most for Gibson here was his timing. Appearing at the ass-end of an outrageous story, his Voz, a wealthy arms dealer who plans on nuking the world into chaos for some inexplicable reason, is the ultimate threat. A point to the movie, if ever there were any.

Can Machete stop Voz before its too late? Will Machete become seduced by one too many tantalizing ladies? . . . will Charlie Carlos Sheen-Estévez’ identity crisis get resolved? You’ll have to find out by tuning into the latest trailer-disguised-as-movie, Machete Kills, one of the most unabashedly silly farces you should allow yourself to see this side of Movie 43. 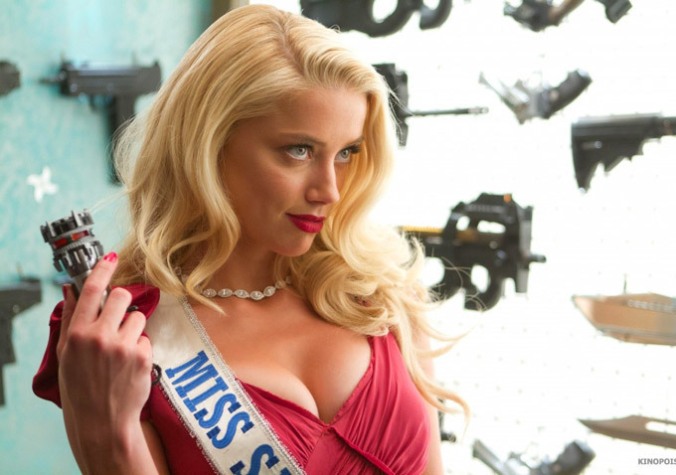 Recommendation: The original likely will be widely regarded as the superior version, as I get the impression this affair lacked some originality in its storytelling (probably the most common syndrome that sequels suffer from), and the Bollywood-esque acting offers no apologies. Still, there’s enough here to have a mindlessly entertaining time with. Guilty pleasures, what’s wrong with having ’em?