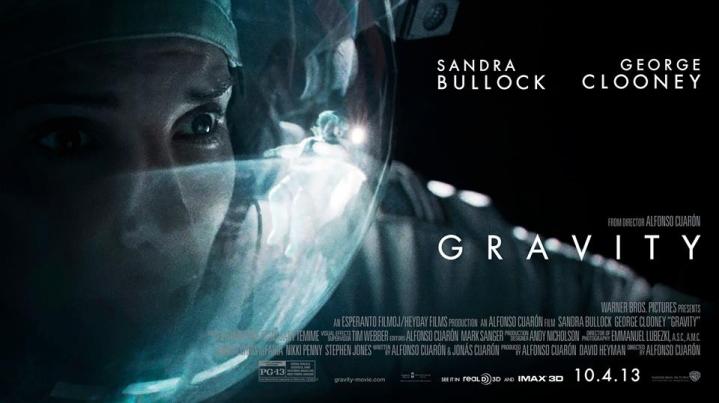 You know, when those first trailers hit theaters circa late July, and the last image is of Sandra Bullock in a space suit doing some somersaults against a void punctuated by dots of light, my reaction — along with those of several other moviegoers at the time — was to just start snickering. That one scene really set itself up for parody. Not to mention, the situation seemed just hopeless, ostensibly impossible to conclude. . . happily, anyway.

In short, my first impression of Alfonso Cuarón’s follow-up to Children of Men wasn’t likely the one he intended. However, my chuckling might be mostly blamed on what the trailers did. Make no mistake — the ones for this film are very, very good. But they do only show part of the real terror that you’re about to witness.

It would certainly seem that on the surface (I know, clever right?), Gravity is a very limited concept. A routine mission turns catastrophic from the unintended effects of a Russian-launched missile that destroys several satellites, and sets this particular crew on a collision course with a wall of space debris just above the Earth’s atmosphere. The crew must find a way to survive — however many of them that may be, and however ridiculous the odds are. That is simply the story we’re given. You could describe the film in one breath.

Good thing you’re only going to have that one breath for the endurance of this 90-minute stress test. The premise may be simplistic, but therein lies both the genius and the reward associated with Cuarón’s sci-fi thriller effort. The most basic of situations, flaws, or missteps that we take (and take for granted) here on earth, under the influence of gravity, instead have dramatic and devastating effects and consequences in space.

From the moment the opening shot is established, be prepared to feel weightless and for your stomach to be in knots from the dizzying heights you’re about to experience. Cuarón and his brilliant camera angles thrust you into the black emptiness surrounding our lonely planet, and similar to how J.J. Abrams managed to convince us that we were all floating in space with the Enterprise, he establishes time and place perfectly — which might sound silly considering that space is more or less stripped of any of the rules and regulations we like to govern our daily lives by on Earth.

Nevertheless, you’re there whether you like it or not, immediately drawn into the lives of these astronauts who are on a seemingly routine mission. We hear them going through procedures with the Command Center in Texas as they service the shuttle. George Clooney’s Matt Kowalski zips around in his spacewalk seat-thingy, ever eager to share the stories he’s acquired having spent many a year in the space program. Sandra Bullock’s medical engineer-turned-astronaut by contrast is a little more reserved and nervous on the job. She’s clearly not as accustomed to having the curvature of Earth as the view out her office/bedroom window. And it’s not like one can really blame her. The sheer scale of this film is more epic than any superhero film has pretended to be in recent years.

What does this film more favors than anything is the staggering attention to detail. From the lack of sound when the shuttle and space station get struck with the debris, to the lack of energy Bullock shows having run out of oxygen in her suit; from the way spits of flame react in zero gravity, to the way equipment rips apart like fine fabric — literally every possible consideration is accounted for here. (When you’re done picking up your jaw, try not to leave too much drool on the floor. Someone else is probably going to be sitting there later.)

Such precision applies to more than the tangibles, which, in a movie like this, are crucial in and of themselves. The acting on the part of Sandra Bullock is simply incredible. Her task in this movie is quite a difficult one. Shouldered with conveying the requisite terror and panic that our collective species is intended to feel in these extreme conditions, she also has a personal story to share, and her experience on this mission will entirely change her outlook on the rest of her life.

When fellow survivor Matt Kowalski asks her about her life on Earth — what she might be doing at this very moment otherwise — she explains she had a daughter. Her portrayal as Dr. Ryan Stone is an emotional tour de force for which Bullock should receive the highest of recognitions. (If there’s any justice in the world, she’ll earn Best Actress AND the film’s extraterrestrial elegance will earn Best Visual Effects.)

This is also not to say Clooney doesn’t get a word in edgeways, either. His ramblings are sources of relief when the tension in the air becomes almost unbearable; his timing is perfect. He’s not given the heavy lifting, that much is certain, but Clooney colors up a supporting character that might have fallen completely by the wayside considering what happens to our heroine here. Ed Harris also voices mission control for the very brief moments they are in contact with one another.  To me, that casting choice is a little funny since he has all of maybe five minutes of line-reading and is never seen. Still, its yet more evidence of the talent that gravitated towards this project. (Man, I really need to stop with the puns.)

Currently, this is the highest-scoring film I have seen this far in my young filmgoing career that wasn’t A) a documentary; B) an indie film with little-known actors in potential break-out roles; and C) not a historical film steeped in facts and statistics. All the same, it has received near-perfect ratings, and is likely to stand out as one of the most complete, immersive and thoroughly researched stories this year.

Oh, and it’s also not an animated film either. Those also tend to do extremely well considering the levels of creativity that are involved in their construction. Notable achievements such as Pixar’s Toy Story earn perfect marks because of their broad appeal (a G-rating helps) and the novelty of the world in which we are stolen away to. A world in which we do not want to leave. Well, here’s a film in which there’s a world we cannot wait to get back to.

Simply put, Gravity sets a new standard to which all coming sci-fi/space films will be and should be held. The director’s previous film, Children of Men, is widely regarded as a powerful and dystopian commentary on a not-too-distant future on Earth in which humans are no longer able to reproduce. But 2013 sees him offering up his magnum opus. Utilizing the most basic of plots and casting top-tier actors who may never have been better, Cuarón draws remarkable conclusions about the stubborn nature of human survival; the will to go on despite every adversity. It may sound a little hackneyed put that way, but with Cuarón’s vision, you can’t help but be grateful for his wanting us so invested in this new reality, this disconnect from humanity. This world that is at the same time without the world.

Recommendation: If, like me, you chuckled at the previews for this, you need to go ahead and right your wrongs. I’m glad I did. Gravity might be the best film of the year.

Quoted: “How beautiful, the sun shining on the Ganges river. . .”