I won’t lie to you. Halloween and the days and weeks leading up to it, give me the heebie-jeebies. For a holiday that’s all about celebrating Satanic practices and dressing up in disguises with the specific intention of obscuring our true selves, I have to say, All Hallow’s Eve is my least favorite eve of ’em all. Not even the candy you get/got as a trick-or-treater is/was all that worth it — candy corn? Ugh. Gobstoppers. . .help. Who knows what that stuff is laced with. And then, of course, you get the wonderful folks who go around and. . .smash pumpkins and destroy other decorative items people invested time and money into putting on their houses. I also think it’s probably the quickest holiday to “age out” of. Going around trick-or-treating at my age is more likely to get you arrested than earn you a nice plump bag of candy. One tends to grow out of this phase prettttty quickly. Especially if you’re a male. I guess haunted corn mazes are still pretty fun. They made for some fun date nights. However, each year that goes by, to me Halloween just gets that much more evil and more kitschy. Finally, though, I’ve kind of got a reason to celebrate it as we head into October with TBT. Each post this month will be a good horror film that I’ve seen from back in the day. I hope you enjoy these entries, because honestly I’m going through a lot  of pain and bad memories reviewing these particular films. I’ll start off with what I consider the “least” scary of the upcoming entries, and will try to crank up the severity of the scares as we go on. Hey, what doesn’t kill us, makes us stronger, right. . .?

Today’s food for thought: The Others. 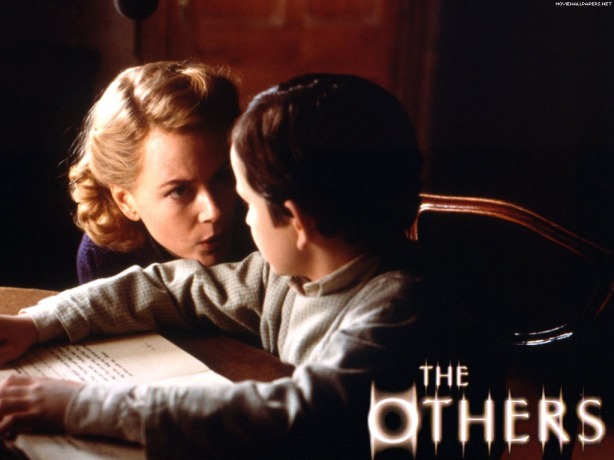 Possibly the very first horror film I have ever seen, The Others is one of the few that succeeded in giving me chills. Remaining low-budget, having a strong script delivered through convincing performances and not to mention, being released in an era prior to this obsession with gratuitous gore and torture in horror films, this film sneaks up on you like a bad dream in the middle of the night and benefits from exemplifying the genre’s strengths.

Directed and scored by Spanish filmmaker Alejandro Amenábar, the British psychothriller serves as proof you don’t need high-tech special effects and complicated schemes to scare up an audience. The Others relies on a steady,  balanced diet of tension and — admittedly, yes, okay — jump scare moments to create an engaging story about a mother trying to protect her young against supernatural forces within her house.

Grace Stewart (Nicole Kidman) is a devout Roman Catholic mother of two children who both possess an extremely rare health condition: sensitivity to sunlight, and so she whisks herself and children away to an old mansion that’s isolated from civilization (as the settings for most of these kinds of movies typically are. . . can’t we for once have like the old haunted place next to Hardee’s or something?) and she has all the windows sealed off from the daily sun rays.

Grace believes she has Anne (Alakina Mann) and Nicholas (James Bentley) safely guarded; little does she know — and is about to find out about —  the servants whom work for Grace have a little secret of their own. It will take the length of the movie to understand the dynamic between the staff and the Stewart family, but it’s well worth the undertaking, in this coward’s opinion. . .

Also, as a non-Kidman fan, from what I do remember of her performance in this from over ten years ago, she managed to really sell her genuine dread and fear, and ultimately her despair and denial. The children were also magnificent, acting as two really young witnesses to some shocking and unexplainable events around the house. Grace first believes her children are seeing things and is initially angry at them for spooking her. But then when she starts to experience odd things herself, she starts becoming suspicious of virtually everything that moves within the house. The staff are her first priorities, and she relieves them of their duties after a couple of sequences confirms her worst fears. But The Others doesn’t stop there. The mystery keeps unwinding piece-wise, and it won’t be until the very end before all the significant pieces are put into their correct places.

Let me dust off the old memory and see what I can recall as my highlights of this creepy little flick:

I also figured, now is as good a time as any to bring back the Caption Contest. Let’s go with these three stills from the film. Throw them creative little bits in the comments below! Have fun, and welcome to October. 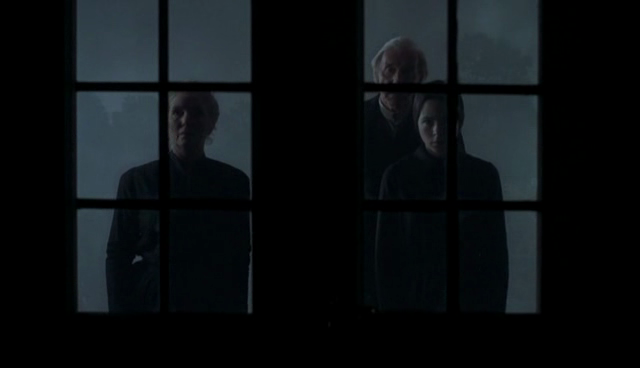 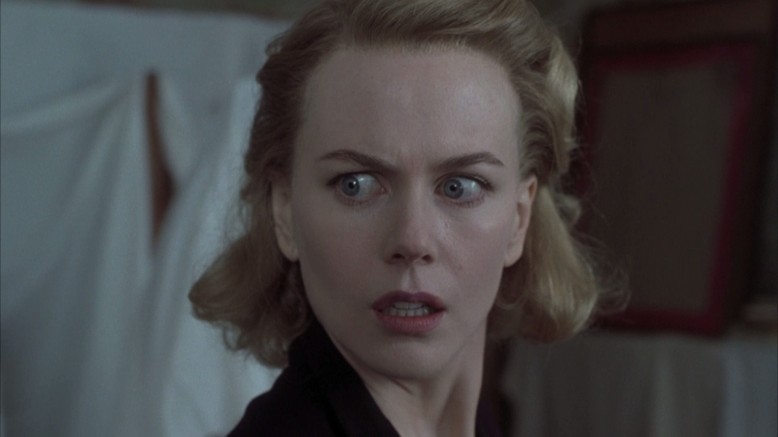 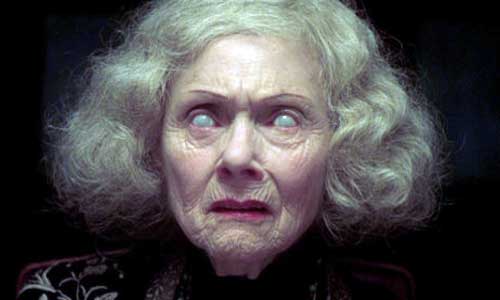 That about does it for installment #1 for the.. . shudders horror segment on TBT, hope you lovely people stick around for the next!

Recommendation: Nicole Kidman in a very good role makes this movie a haunting one to experience but it’s not gruesome, nor big on special effects, either. If you’re keen for watching a more low-budget horror in a similar vein to Jessica Biel’s The Tall Man, you should give this one a shot.