Okay, so as we all know by now, this upcoming weekend is a doozy. First, the release of Don Jon, the brand-new film that’s directed, written by and starring the multi-faceted Joseph Gordon-Levitt. Secondly, and with all due respect to JGL, more importantly, Ron Howard’s new biopic, Rush, finally gets the green light to be released before worldwide audiences. All September long I have been taking some (brief) trips back in time by revisiting some flicks that feature cars and/or racing in some major way. Ranging from the slapstick/comedic to the more atmospheric and dramatic, this month’s entries have been a ton of fun to compose, and it has really helped to build some momentum as we head into the next Howard masterpiece (fingers AND toes crossed here, peeps). So with the appropriate formalities behind us, let’s dive into the fourth and final entry in this month’s TBT thread.

That the Italian Job remake would involve Mini Coopers was a concept I at first was slow to respond to. I felt that the cars were silly-looking in a movie, though this was probably another ill-begotten impression I had acquired as an angst-riddled, pimply teen in high school. I also had no idea what to look for in movies then, either. Sixteen-year-old me, the fool.

The more I think back on it now, the cooler this movie seems and the more those tiny but speedy little shopping carts seem like characters themselves. They’re certainly crucial to the story.

Charlie Croker (Mark Wahlberg) heads up a team of master thieves to reclaim what’s rightfully theirs after being robbed at gunpoint and left for dead by a traitorous inside man. After the most recent job has gone without a hitch, the gang — John (Donald Sutherland), Handsome Rob (Jason Statham, repping probably the best character name he’s ever been given), Lyle (Seth Green), Left Ear (Mos Def) and Steve (Edward Norton) are en route to split the $35 million they just lifted from a safe in Venice into their own personal shares when they are betrayed suddenly by Steve, who’s been apparently waiting a long time for this moment.

Thanks to some unfortunate developments, Charlie has to crawl back to old acquaintances for help in his new mission to retrieve the gold from Steve, and enlists the help of expert safe cracker Stella (Charlize Theron), who happens to be John’s daughter. A tried-and-true, formulaic plot has her character reject the offer at first, but as sure as eggs are eggs she eventually comes around. Also predictably, the rest of the gang doesn’t exactly take kindly to the presence of a woman on the job, and despite her obvious beauty she finds it difficult to fit in immediately.

When the gang finally seem to be functioning like a tight-knit unit once again, they make their first moves on Steve, who is living luxuriously in a heavily-guarded estate in the Los Angeles area, and appears to have accrued a number of items that some of his former colleagues had said they were looking to buy once they had the money. Indeed, Ed Norton manages to pull off the highly dislikable role of Steve Frezelli with ease. He’s a sniveling, hot-tempered man who doesn’t appear all that intimidating right from the get-go.

In essence, he’s the perfect villain here — the quintessential action-movie bad-guy-as-Benedict-Arnold — a man who is on par with the rest of the cast in terms of having the same kind of intuition, the same levels of emotion and a shared personal history to make the showdown(s) more compelling than it/they rightfully should be. This remake, which comes nearly 35 years after the classic Michael Caine version, certainly ups the ante with respect to the violence and other suggestive themes (for those who are unaware, the 1969 movie is rated G), but it  still maintains a fun, energetic atmosphere that gives this new version a reason to exist.

The Italian Job dances around familiar themes and despite a lot of high-tech gadgetry and thoughtful planning, this plot’s combination isn’t exactly a tough one to crack, though it’s easily digestible and the film overall is a total blast. The ensemble cast convinces us they are at least having one. It’s reflected in their respective roles with the way everyone gels as a group as they turn the tables against Steve and his henchmen. Wahlberg and Theron make for a highly likable pairing, and his crew — particularly Mos Def and his dog phobia — succeed in bringing forth the laughs.

With several memorable car chase sequences — who doesn’t want to take their Mini Cooper down a flight of stairs? — this film makes for a nice exit from the ‘Movies that Really Move’ theme this month. It’s a constant reminder of my needing to seek out the original, as well. I maintain a healthy skepticism of every remake ever done (Robocop, let’s see if you can be an exception) so I’m fully expecting the enjoyment level to increase greatly when I sit back and experience the material upon which this highly-amiable adventure is based. 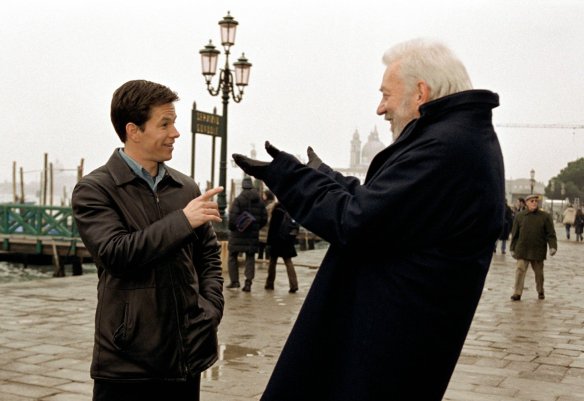 Recommendation: A fast-paced and decidedly more Americanized heist film, F. Gary Gray’s version may not be the superior one, but it’s both a good example of a remake treated with respect and is simultaneously a riveting little outing that’s filled with entertaining characters and some fun in Mini Coopers. And Ed Norton is always great to watch.