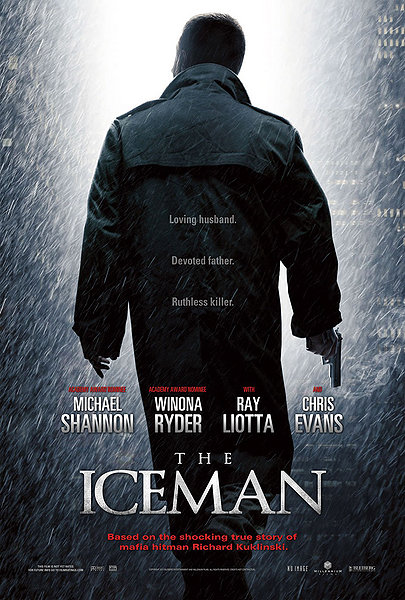 The great Michael Shannon assumes the role of a paradoxical contract killer/family man, Richard Kuklinski — a man who proves that possessing two faces is only gonna get ya twice as hurt. And twice the jail time, in all likelihood — the real-life serial killer ended up with a double-life sentence for his murders of more than 100 people. Yes, you read that correctly.

The place: northern New Jersey. The time: circa 1954, when Kuklinski first got involved in the New York mafia, and over the next 30 years he would go on to murder dozens and dozens of men — only men — most of which were simply next on his list and some of whom had irritated him in some way. Using a variety of weapons which included guns, knives, tire irons and cyanide, Kuklinski was successful in evading the authorities for so long since his methods would often change and his tracks were constantly covered up. His nickname ‘The Iceman’ was earned due to both his incredible lack of emotion or concern about what he was doing beyond the fact he was only “doing his job,” and because he often froze corpses in freezers to eliminate any chance of the police being able to determine time of death.

While it may not be the best compliment one could pay Shannon, the guy’s got the perfect mean mug to really pull off a role like this. Unsurprisingly, he’s electrifying. Terrifying. He gives Ray Liotta a great run for his money in this movie — a man I’d be willing to name-drop in the same conversation with Robert DeNiro and Joe Pesci as best gangster/mafia personalities ever to grace the screen. It’s also a great treat getting to see Shannon carry a lead role for once.

Shannon does a spectacular job portraying the apparent bipolarity that the real killer suffered from: in one moment Kuklinski is a doting, loving husband and father of two perfect girls; the next, he’s dismembering his victims and disposing of their bodies into the river. The ease with which he slips in and out of his professional and personal lives is quite chilling. Unfortunately, one can’t exactly say that the events contained herein are unpredictable. The Iceman does fall into formula quickly, and deeply. (There’s only one way a film like this can end.) Still, it’s all about style points here.

In the earlygoing we see Kuklinski trying to pay back the money he’s just recently lost after miscounting the number of boxes of pirated pornographic films he’s meant to deliver. His boss, the greatly-feared Roy DeMeo (Liotta), is at first rather annoyed with Kuklinski’s mishandling; then, once he gets to know the guy a bit better, he learns that “the Polack” — as he so refers to him from here on out — has an unusual ability to stay calm, cool and collected during murders. Having passed the “first test,” DeMeo enlists Kuklinski’s services. Kuklinski never looks back.

What unfolds is a grisly story of a man working to feed his family and provide a roof over their head, by whatever means necessary. However, it proves impossible to maintain this precarious balancing act forever. One afternoon after ditching his plans to tick off his next target on his hit list — opting to take his wife who had recently fallen ill to the doctor’s office — police swarm his home and he  is arrested on-sight. The movie portrays this as quite the epic struggle, and at the moment, it’s quite an emotional event. You nearly feel sorry for the man. That’s all attributable to an astonishing performance from a consistently brilliant actor.

There’s a number of riveting performances here as well. Ray Liotta as the mob boss DeMeo is reliably threatening — no disappointment there. Captain America (a.k.a. Chris Evans) reveals his darker side, stepping into the role of fellow contract killer/psycopath Robert ‘Mr. Freezy’ Pronge, who disguises his true profession by driving around in an ice cream truck. Few things are more unsettling than seeing a twelve-year-old corpse frozen in the same freezer as the ice cream treats. Evans all but disappears inside the role (and the make-up). Even James Franco shows up for a brief bit and pours his heart out.

Though it’s not the most inventive story you’ve ever seen, the film is performance-based and ends up benefitting quite a lot from the leads and its contributing cast. The methodology of and the circumstances surrounding its titular character are more than compelling enough to justify an immediate search on Wikipedia for some more background information on the guy. The real story is almost too shocking to be true.

This is a crazy world we inhabit. 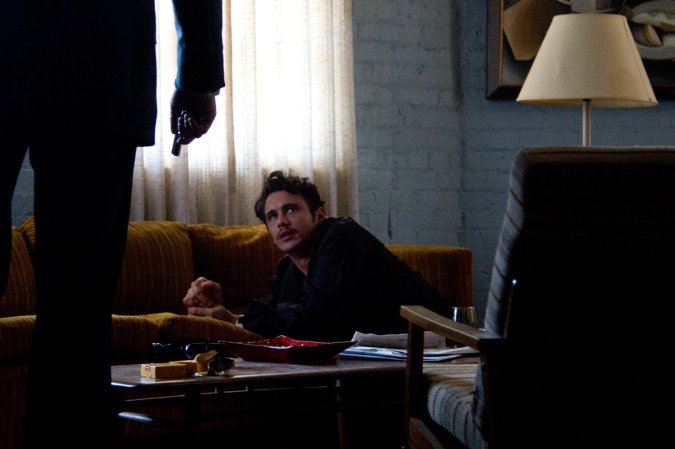 Recommendaton: If you are a fan of Michael Shannon, you’ll find The Iceman to be perfectly acceptable viewing, even if it contains more than enough murders to warrant the ‘R’ rating alone — never mind the blood and language. For those who are a bit squeamish and/or not the largest fans of grisly crime-dramas, this might not be your movie. However, there is a more general appeal to this movie in that it provides a rare treatment of the mentality of a serial killer. How The Iceman manages to simultaneously paint the man as a decent father and as an efficient contract killer should be motivation enough for a wider audience to seek this out.

Quoted: “Do you see the Iceman crying?”

12 thoughts on “The Iceman”