This Thursday afternoon I’m getting away from Hollywoodland. I’ve been finding myself in the climbing gym a little bit more these days, so let’s throw it back to one of the best climbing porn videos I’ve ever seen — King Lines. If you haven’t seen many climbing videos or videos of other similar outdoor activities, you’ll likely be unfamiliar with the term ‘climbing porn.’ It may be helpful to break this term down, since I’ll probably be going to it a lot in the following review: it’s any video that simply captures the sport at its best, be it due to incredible feats of athleticism, sheer artistic creativity, and/or the quality and exoticness of the locations featured throughout. Most of these acclaimed videos feature a good amount of all three, which truly makes otherwise unremarkable footage of people climbing (and sometimes falling, too) really worthwhile watching — hence the term of endearment. Climbers are known to throw such a term around with no hesitation as are kayakers, skiers, wake boarders. . . probably even motorized scooter-ers. In this case, we’ve got some incredible climbing on our hands as we take a look into the life of one of the sport’s premier performers, Chris Sharma. 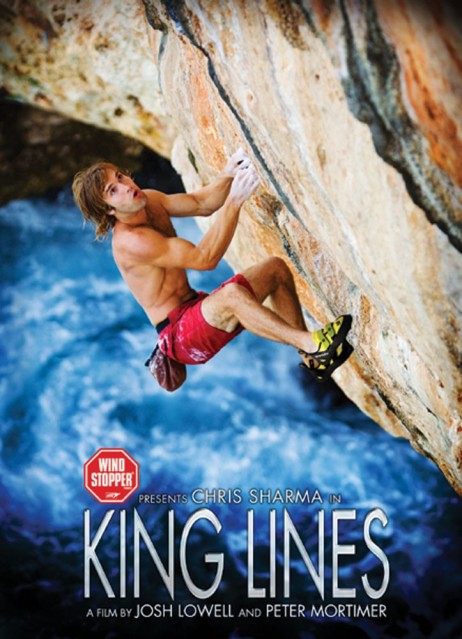 Get ready to dive into a spectacular world of pastel colors and perfectly sculpted rock as we follow across the globe one of the most dominant athletes of his generation — Chris Sharma, the rock climbing prodigy from Santa Cruz, California — in his quest to discover the biggest and most obscure routes on the planet. The BigUps-produced documentary, filmed by accomplished directing partners Josh Lowell and Peter Mortimer, is a 70-minute adrenaline rush that combines exciting action with a compelling documentary-style story that nitpicks through some of Sharma’s most inspired and inspir-ING moments in his young professional career, and finds him continuing to make history in multiple aspects of the sport of climbing.

Some of the adventure’s highlights include the successful completion of an 80-plus-foot natural route up an isolated arch formation in the sea; his first attempts at sussing out a 200-foot sport climb (routes which don’t require placing gear in the rock, just clipping bolts every twenty or so feet) on a gigantic chunk of limestone in the desert; discovering new boulders to climb on a remote South American rock plateau; as well as a fascinating discovery of his personal life as he went from rock climber to rock star. Never before has a climber’s life been so analyzed in one film — and fortunately Lowell and Mortimer mix just the right amount of that material with some of the most visually arresting climbing moments you’re ever going to see. The journey takes us to paradises ranging from the gleaming cliffs of Mallorca, Spain; to the white crown of rock overlooking Céüse, France; to the unforgiving desert at the California-Nevada border; and even in for a quick stop at Chris’ old house in Cali.

It’s the moments of peace and quiet, the more intimate footage of the climber that sets King Lines apart from a majority of other fascinating climbing films. The focus on personal aspects of his life is effectively meshed with footage of Chris at his most iconic (you need to seriously hear this guy when he’s climbing something really difficult), giving us a well-rounded perspective that not a lot of other films really care for. Not that they need to, either. Most films exist to show a variety of different climbs, in the format of a compilation of several edited sections of climbs in different places, involving different people. But the intent behind Lowell’s new project was to offer something far closer to a biography and make the film have a much more theatrical appeal, an effort which really ends up paying dividends. Not only are the climbs that Sharma attempts magical and supremely difficult, they mean something because they are in relation to something more than just “the next climb” in the story.

Sharma became fascinated with the sport of rock climbing at an (unsurprisingly) early age — around 12 or so, and was released from the hellish grips of high school before he completed it so he could tour globally with other athletes to compete and win big cash prizes. And he did just that from pretty much age 14 onwards. As the movie makes it clear (and although anyone who is really into climbing probably already knows this about him prior to King Lines) he’s been an unstoppable force ever since. While there are other climbers out there currently who may exhibit even stronger physical traits, perhaps no one has been so good for quite as long as Chris has. Time will tell on that. But few will be able to physically embody the sport quite like Sharma has either — even with all the positive and negative connotations that come with being a role model for rock climbing.

There’s no doubt that where Lowell and Mortimer catch Sharma is, being realistic, in an advanced stage in his career. With the film being shot in 2007, Sharma was entering his late 20s (26 at the time) and in the arena of anything athletic, approaching 30 is a significant milestone regarding one’s performance. However, it seems that he’s always going to be the type of dude who enjoys defying certain realities. He’s 32 now and still performing at a remarkably high level; in fact, he’s close to completing the hardest routes he’s ever done — which is synonymous with the highest degree of difficulty currently possible.

This half-documentary-half-adventure film provides plenty of examples of his physical dominance at ages both young and more matured. A teenaged-looking Chris removes an outer layer of clothing during the middle of a climb, a climb that turns out to be in the top tier of rock climbing difficulty at the time. Later in the film he sticks a gigantic move in a public competition in Barcelona using only one arm, and moves beyond it — a move that few (if any) previous climbers had been able to perform using both. King Lines showcases why he’s been the Michael Jordan of rock climbing for so long. A certain segment will show you just how “mainstream” the name ‘Chris Sharma’ had become at one point in American culture. It’s really quite fascinating.

As is typical for most films of this variety, there are multiple interviews with other key players in the game. The cast here includes the likes of famous climbers Boone Speed, Miquel Riera, Randy Leavitt, Dave Graham, Melissa LaCasse, Sam Whittaker, Ethan Pringle and the gym instructor Andy Puhvel who was among the first to discover Chris’ talents. Each interview is actually substantial and doesn’t feel awkward and obligated as a good number of these do in lower-budget versions of climbing porn. They also fit well into the overarching narrative, another trend that doesn’t usually work out that well in other climbing videos. It would seem that King Lines is the cream of the crop when it comes to watching climbing. Since its release, a host of other similar quality films have been pushed out to the young and unruly market, and while it may be a stretch to definitively say this one film inspired the style of more recent films and shorts, it wouldn’t be a stretch to at least think this would be possible. King Lines is as influential as any climbing video is likely to ever be.

Recommendation: As obscure as a film like this is, King Lines could have made a strong bid for having an actual theater release. I would absolutely pay $20 to see this on an IMAX screen, by the way. It’s a climber fetish film, but it has more layers than just the simple joy of getting to see some quality rock being climbed and some cultures explored. At the heart of it is an intriguing story about one of the world’s top climbers and his personal journey to establish some of the world’s hardest climbs as well as some of the most beautiful. It’s a story that could satisfy on any level of engagement in the sport, even those who don’t do it (or even like it). This is a climbing film that cannot be called ‘boring.’ It might be even more basic than that: it’s a film that cannot even be really called a ‘climbing film.’ It’s a film about climbing, and the difference will be noted almost immediately by those who are frequent climbing film viewers.