Picking up more on where we left off after X Men: The Last Stand rather than following directly in line with the most recent release (X Men: Origins — Wolverine), James Mangold directs Hugh Jackman et al with supreme confidence in his knowledge and conviction of the essence of the comics, while also attempting to feed the masses with a broader, more blockbuster-esque appeal — ideally one that should have everyone talking fervently about it afterwards. To an extent this happened after the Thursday screening I attended, though I could sense a mixed atmosphere of excitement and quietened “that could have been better” sentiment.

Maybe it was the late hour at which this showing wrapped up, but I somehow doubt this was the real problem. There was a lack of a punch that I felt might be coming with this latest remodeling of our clawed hero. Or it might have just been one of those punches that comes in hard and then eases up just before greeting your stomach, letting you off the hook as far as taking some real pain is concerned. Mangold seemed to go this route with his directorial touch.

The Wolverine begins with a damn bang. Japan. World War II. The last days are laying waste to the Japanese landscape, and there amidst the chaos is Logan/Wolverine, who has managed to become the next P.O.W.; fortunately he uses his powers to save a camp worker (a man named Yashida) who is debating the merits of dying a noble death (by committing suicide) or letting the ensuing atom bomb devastation do the job. Wolverine intervenes, saves the guy and himself from the blast, and we then see that this has all been a flashback, and a thoroughly gripping one. A strong start to the film.

Unfortunately it was immediately after this where things took a turn to the familiar, and the resultant film pans out to be little more than a hodgepodge of the spirit of the comics — even if it is well-suited and recaptured here — and several nondescript kung fu films, only shot much better and with no funny spoken/translated overdubs. Indeed, there is a lot to like and be easily entertained by in the adventures Logan/Wolverine has when he’s one day summoned back to Japan in order to bid farewell to the ailing man he saved those many years ago. When a bar fight breaks out in an area where Logan is currently holding up in, he meets a young girl named Yukio (Rila Fukushima) who insists he go pay Yashida a visit. We are provided the initial hesitation at first, with Wolverine claiming his home is here, in Canada; but eventually he caves and yields the movie.

Of course, Yashida has more on his mind than just having a pleasant chat with Logan. The head of an international technology developer that specializes in medicinal research, the man whom Wolverine had saved finally tells him that he can “fix” Logan’s immortality. He knows of a way to introduce his amazing healing powers into another person; as if his inability to die is some sort of dormant genetic trait. Yashida gives him the chance to lead a normal, mortal life. Cue Wolverine’s polite “Thanks, but no thanks.”

During the brief time he stays with Yashida he meets his son, Shingen, and his granddaughter Mariko (Tao Okamoto). After a few suspicious events transpire, Wolverine soon finds himself becoming Mariko’s protector, despite her requests to be left alone. No can do, apparently, as the strange but dangerous aura surrounding her keeps Logan intrigued. And even despite his constant struggle with his nightmares of Jean Grey and other events, he manages to keep focused on his mission to protect her and get to the bottom of her situation.

Along the way, he finds out that he’s in deeper than he thought; members of the Yakuza are quickly implicated as they take Makiro hostage during a funeral procession for Yashida, and in the process, Wolverine gets injured and realizes he isn’t so quick to heal now. It turns out the Yakuza certainly aren’t the only baddies to worry about here; no, a much more intimidating — is intimidating the right word? — villain remains at the center of our main conflict. Viper, chosen for whatever reason to be the villain in this edition of the X-Men franchise, single-handedly destroyed a lot of the momentum for me. Played by a terribly bland Svetlana Khodchenkova, this mutant is meant to be the true opponent to Wolverine, but she winds up doing more damage to the movie than to our clawed hero. Either the casting was a poor choice, or the intention was to make this villain seem as calm, cool and coldblooded as possible. Whatever it was, she just does not work here at all and from the moment she was introduced to the story, The Wolverine started losing credibility with me.

But perhaps that’s not fair to say. The movie doesn’t intend to win any Oscars, therefore I maybe shouldn’t take the movie so seriously. It’s meant to be an entertaining, light-hearted affair. Unfortunately, though, the previews and trailers released weeks and months prior were telling a very different story. I got the impression we were in for a darker, more brooding story. That is true of the character of Wolverine — he’s perpetually miserable in this movie, constantly awakening from horrible dreams and fearing for his life around many a corner. He’s been cursed with the ability to live forever, yet someone challenges him in the beginning to take on a life of mortality. These things do take their toll on the character, and that was interesting, yes. But the story simply crumbled around him in comparison.

And Hugh Jackman, of course, is as likable as always. I have no problem whatsoever with the work he turned in here in 2013, despite the fact he’s not doing anything radically different than from before. Additionally, I must give credit to the main girls following in Wolverine’s tracks: Yukio and Makiro both are intriguing characters and aren’t quite as cardboard as the Viper. Yukio is a brilliant girl who can “see” or “feel” what’s going to happen in the future and acts as a bodyguard to the temporarily ailing Wolverine, a relationship that allows a few jokes here and there. Makiro is convincing enough as the damsel in distress, and although its a cliched character arc, her situation managed to make me empathetic. 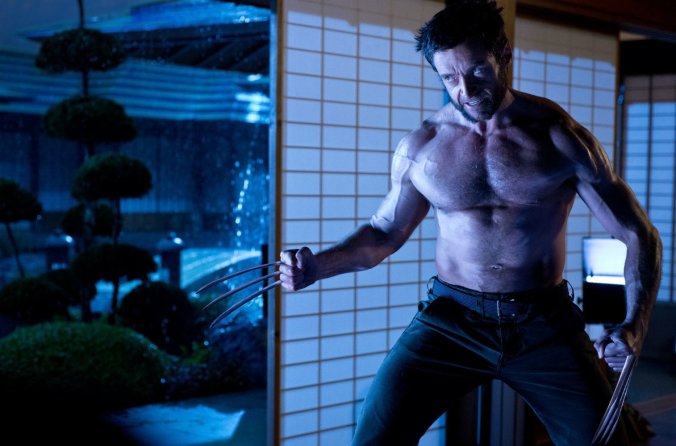 Recommendation: Most of my disappointment, it should be noted, could be traced back to the pre-release hysteria coming from the studio. “Wolverine fans, rejoice. This is the movie you’ve been waiting for. . .” Given the fact I am not the most devoted follower of the X-Men story to begin with, it might be easier for me to think this has turned out to be a bit of a lie. More passionate fans might find themselves enjoying this much more freely. There’s not much that distinguishes it from its downright corny predecessor. Lest I sound ignorant to what the spirit is all about in the superhero realm, it’s okay to be corny but it’s not okay to be unoriginal and lie about it being original.

17 thoughts on “The Wolverine”