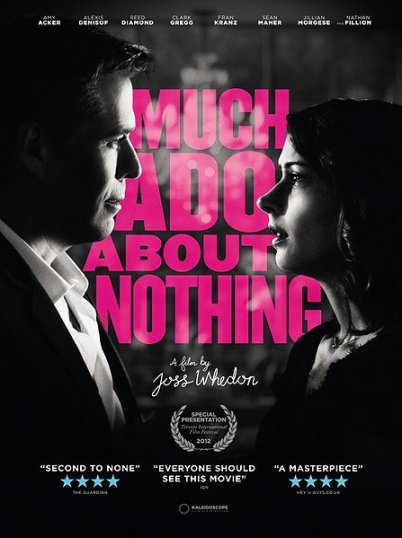 From Marvel’s The Avengers to. . . . . . a Shakespearian play? Joss Whedon makes the jump in genres seem all the crazier when I tell you that I believe that his vision might be the one that tops Kenneth Branagh’s incredible 1993 film by the same name. And of course, these aren’t the only folks who have had their hand in reshaping one of the great playwright’s most beloved comedies. It’s also hard to imagine that the best version of Much Ado About Nothing will be anything besides the original, when it was played out on stage by the Lord Chamberlain’s men. Still, subsequent versions have proven worthwhile and immensely enjoyable experiences. Fortunately Whedon’s new project — one that won’t require so many popcorn bags to be purchased — does not buck the trend.

His camerawork in this is so unlike his ability to capture the epic and the iconic structures of the superhero world; indeed, the slight and whimsical storyline of Much Ado requires virtually the complete opposite treatment, which Whedon manages to great effect. This is a film that is both intimate and elegant in setting — it was shot in a total of 12 days, exclusively at Whedon’s Santa Monica residence — and has cinematography worthy of at least a nomination. It’s gorgeous and strengthens the presence of every character in the frame.

Some could find the visual contrasts a little jarring in the very beginning, admittedly. You first see these characters and if you are like me, you are caught off guard at first by just how they speak. The muted color saturations, coupled with Shakespearian prose is juxtaposed against the habits and customs of 21st Century living. Bottles of beer are being clanked together; fists are bumped rather than hands shaken; iPods now the sources of music at parties; Counts and Lords garbed in Giorgio Armani.

Dogberry spews his hilarious lapsus linguae to his small staff who have flat screen Dell computers.

But as the film unfolds it becomes easier to adjust. The more we see of the characters interacting, it’s all very natural and we are reminded once again of the genius in Shakespeare’s writing and romanticism. The atmosphere is light; the mood slightly silly but perpetually energetic. The cast, though not well-known, is definitely a strength. This time around we have Ami Acker as Beatrice, and Alexis Denisof plays Benedick, who make up the central romantic affair. Surrounding them are Fran Kranz as Claudio and Jillian Morgese as Hero; Clark Gregg goes from manning SHIELD to playing Hero’s father Leonato; and we have Reed Diamond playing Don Pedro, Sean Maher replacing Keanu Reeves as the Bastard Prince Don John; and Spencer Treat Clark taking on the role of Barachio. . . that sleaze-bag. Not Clark, but. . .well, you know what I mean.

As Dogberry, Nathan Fillion has an absolutely wonderful supporting role. He oversees a squad of semi-competent, but fully overzealous night watchers, of which two were actually successful in curtailing the plotting and scheming of the shadowy duo, Barachio and Conrade (here played by Riki Lindhome). The moments with them and Dogberry serve as the funniest moments in the film undoubtedly, but are also very well-acted and reproduced in a contemporary setting. That was the case with a lot of the material in this film.

The story may be well-known, but to bring everything and everyone up to speed. . . . Much Ado is the comparison of two love affairs — that of Beatrice and Benedick who essentially are lovers in denial who must endure a battle of wit and of carefully calculated ‘rejection;’ and the other is quiet but fierce love affair between young Claudio and Hero. Benedick and Beatrice are tricked into confessing their loves for one another by waves of gossip, while Claudio is tricked into thinking his soon-to-be-wife is not faithful and their relationship seems to trend the other way. But this all is found to be the scheming of the envious Don John, who seeks revenge on his brother Don Pedro. He instilled in Claudio the idea that he was wooing Hero secretly. Then Barachio commits an act before an open window in the presence of Claudio, convincing him to think that Hero really was cheating. The malcontents eventually receive their comeuppance thanks to The Watch and Claudio is reunited with Hero in the end after all truth is revealed. I won’t add more info than that, although it’s, again, well-known territory I’m skipping over here.

There’s also a very rich soundtrack flowing throughout the piece that ties both the romanticism of the Shakespearian era to the Messina we have portrayed here in the present-day. Party scenes are lavish and look very fun. The moments of darkness and drama, as light-hearted as this comedy is, are overhauled with the appropriate overture that seems to give as much life to the movie as the script and acting do.

Going into the film I really had no preconceived notion about how Whedon might be able to handle this material. I can’t remember the last time I did see the Branagh one, so I was unable to accurately have a picture in my head as I sat down (in an empty theater!) Frequent YouTube visits after the fact have jogged my memory and reminded me that it was indeed infectious and it was indeed endearing; Branagh’s was a fully-realized portrait of what Shakespeare was trying to say about the nature of pride and honor, of courage and conviction and speaking truthfully. Whedon, using the original text, is similarly successful in that he’s been able to adapt the story so as to not make a carbon copy. The title may suggest that there’s a lot of fuss being kicked up over nothing here, but there’s no shortage of reasons to go see this latest adaptation.

Recommendation: Joss Whedon has successfully created an undeniably accessible version of the famous comedy, and it plays out as breezily as you think it ought to. For anyone who is a fan of anything Shakespeare, this is a film you cannot miss. For fans of film in general, this is also going to be a high priority. It’s another Shakespeare play to fit our times, and will likely join the ranks of appreciated contemporary overhauls like Baz Luhrmann’s Romeo + Juliet and certainly Branagh’s version, which was some 20 years ago now.

8 thoughts on “Much Ado About Nothing”