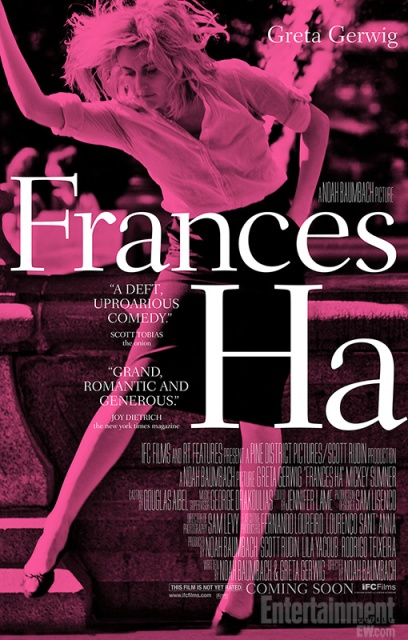 Oh, Greta Gerwig — where have you been all my life? I’m sure many guys have asked you this, and even though you’re going to let my forthcoming flattery roll off you and your leather jacket like water off a duck, I’m going to ask this anyway: Can I go out with you? Please?

Well, that was to be expected. Gerwig’s character in Frances Ha (I think you might guess her name relatively quickly) is at once committed to something, and then not so much. That’s either by choice or by the forceful hand of reality. That’s actually not entirely accurate. Her character is bound by circumstance. Sometimes she’s doing something strange (like, really strange — to the point of seeming delusional) and other times she’s making moves we all likely would make in these particular moments. Whatever she’s doing though, she’s doing what a girl has to do to get along in this life, even though she doesn’t know quite exactly what to do or how to do it.

She’s a New Yorker with no high-rise apartment. Actually, make that really no apartment at all. Frances is caught in the beginning of the movie in an awkward transition between a soon-to-be-ex-boyfriend’s small loft and, well, the next. . . . place. She ends up rooming with a few new friends — two guys who seem to be on tracks of their own relative success. But this also does not work out for much longer, as she finds herself struggling to make even the minimum rent payment. It seems that nothing is going to work out for our giddy protagonist for too long.

The movie is paced as such. It’s like flipping through a photo album, each photo on the page telling a brief yet intimate and complete story. The majority of scenes that make up Frances Ha last only but a few minutes, but are such great snapshots of life it is impossible to argue they are too brief. Director Noah Baumbach pieces each snapshot together with utmost skill, forming a unique cinematic experience that plays out more like a relic of the 1940s or 50s. Maybe a lot of that  is impressed upon me thanks to the exquisite locations (Manhattan, Paris, etc.). Maybe it’s because it’s shot totally in black-and-white. Maybe I was taken away because of my hopelessly misplaced sense of romanticism.

Frances is an aspiring dancer whose apprenticeship with a New York dance company is really taking her nowhere. Her best friend Sophie is moving out to chase dreams of her own, leaving Frances in some kind of a daze. Her parents are unable to help out financially, though they wish they could. Frances is “un-datable.” Indeed, this film is very much steeped in real world issues and sentiment, and if you don’t mind a narrative that takes its time in finding just where the sweet spots in life are, this is the film for you. At points it’s easy to be thrown off as to where we are really going with it all, and the ending certainly can sneak up on you.

But it’s imperative with a film like this to enjoy all the simple things as well as the complex; Frances’s walks about town are as integral to the story as her idealistic conversations with Sophie; with her parents; with her peers at the dance company.

Recommendation: There’s no denying this film’s awkwardness. There’s a lot of charm to that awkwardness, though and it was very enjoyable to see a previously unknown actress (to me at least) blossom into a soon-to-be star with this role. Greta Gerwig is fantastic and is worth paying to see this movie even if you know little to nothing about it. I highly recommend this one.