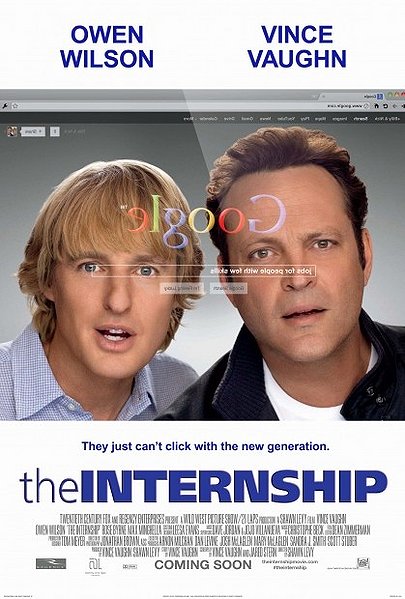 This only makes my second advanced screening since Tropic Thunder. Clearly, I need to find myself in the right place at the right time more often….

Because it was a sneak-peek, I think it’s easier to jump to conclusions and either be immediately in love with a film because you saw it ahead of time, or immediately take a dislike to it and want to warn others because you saw it ahead of time. No false advertising here though, guys and gals — The Internship is an unqualified success, and likely will wind up becoming one of the best and more successful comedies of 2013.

The Internship is a perfect blend of several things I really love about comedies: first, a chance to mine an unlikely, unique location for comedic gold (in this case, it’s the Google main campus in Silicon Valley); second, the buddy-buddy lead roles that also function as one source of some of the bigger laughs  (Vince Vaughn, who plays Billy and Owen Wilson who is Nicky are some of the best in the game to call upon for this role, and they do succeed here just as they did in Wedding Crashers); third, relevant commentary on social status, life goals, or something more grandiose than simply what the main storyline presents (with The Internship, it’s about coming together as a team and working effectively, something that the movie itself demonstrates with utmost skill, while operating in the Vaughn/Wilson comedic style appropriately). Many are going to dismiss this as a bland comedy, but in so doing, they’d be missing the mark by a good long shot.

For starters, there’s nothing at all bland about Vaughn and Wilson riding around campus on the Google-colored bikes, or wearing the ‘Noogle’ caps that are required of all new interns at Google. Not only are such fanciful elements great sight gags, a lot of it is true to what goes on on campus. This movie may not be bold enough to go where no other comedy has gone before — and by that I am really referring to its overall direction and character development — but what has been developed here is more than enough to make a touching movie that is also intelligent, funny, and timely. (Well, maybe less so on the third part, Google has been around for a minute…but it is nice to see a movie that now incorporates this conglomerate website into the story). This setting in particular also lends the film an unusually visual feel that is impossible to ignore.

I need to really not gush here, so let’s now focus on what exactly is working for this movie, and how it manages to stave off mediocrity and rise above to be something worth remembering months from now.

Billy and Nicky are two out-of-work salesmen who once sold watches but now find themselves fighting to gain a viable job with this massive company. Thankfully, all they have to compete against are young twenty-somethings fresh off the boat from their respective Ivy League schools. During a relatively ridiculous application process, the pair insist that they can provide the company with something new, something fresh….if they are just given the opportunity to try.

One particularly skeptical employer (Aasif Mandvi) is quick to dismiss Billy and Nicky as not only borderline age-inappropriate for the jobs at hand, but also lacking in brain function to really fit into Google’s intern program; alas, he reluctantly accepts them and off we go, foraying into “some sort of mental Hunger Games against a bunch of genius kids for just a handful of jobs.”

Day One: all interns are to group themselves together to work towards accomplishing several tasks which include reading and developing code for the website, creating and demonstrating a new, “legitimate” Google application, and working customer service hotlines. Through the process it becomes clear who’s good at what and who’s terrible at other aspects. The Internship pieces this together nicely, while giving ample time (arguably a bit too much time) to branching off, using Wilson and Vaughn as the experienced guys who can show some young up-and-comers a thing or two about managing their own expectations, personal/professional goals and defining what should be most important to them.

Sensitive direction from Shawn Levy (Real Steel) is to thank for most of this film’s easygoing nature. It’s neither too sappy nor too over-the-top, providing a good mixture of humorous and serious undercurrents.

I suppose one fault the movie might have (and I’m not even sure if this is necessarily a bad fault anyway) is that it does borrow a lot from the comedic style of Wedding Crashers. Wilson and Vaughn ostensibly are the same, perpetually optimistic straight-talkers going through a crash-course on how to fit into groups they otherwise would be ostracized from. But if that’s a weakness, that’s an acceptable and far more preferable one to the alternative — not being funny at all.

I give Vaughn more credit especially since he is the man behind the idea of taking a film set to the Google campus. He explained how well the project came along; that there was a kind of natural alignment of comedic talent, scriptwriting, and trust amongst every person involved that all seemed to perpetuate a thoroughly enjoyable filmmaking experience. I tend to believe the relationships that were built coming into the film generated a better movie, since it’s hard to argue how these two always appear to be enjoying one another’s on-camera energy. In 2005 it was there, and now, eight years later it’s certainly there, but with a much funnier and stranger backdrop. 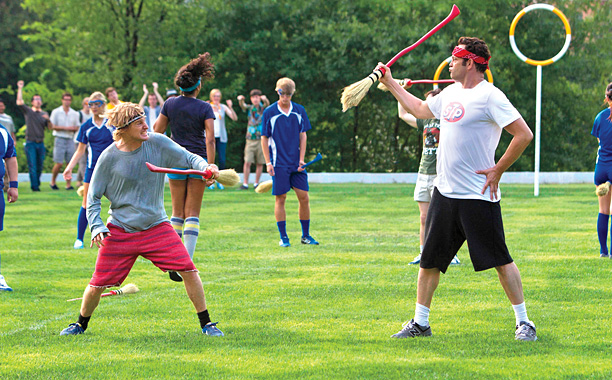 Recommendation: There’s not a whole lot of studying you need to do before taking The Internship. If you don’t mind — better yet, really enjoy — the mentoring of comedic masters Vaughn and Wilson, this will be an enjoyable way to spend your time. If not, then I’d say look for something somewhere else (on Google, of course).

9 thoughts on “The Internship”