For The Words, really, I have no words. Or positive ones, anyway. This was a silly film that I just wasted my time on, and that’s being really generous. I thought, hey, a Bradley Cooper film with Olivia Wilde; should wind up being an interesting pair. Long story cut short, those two don’t share screen time, and neither star really gets sufficient time at all in a plot that is about as convoluted as the movie’s title is dull.

Wilde plays the part of one extra-curious grad student who wants to hear about the story about Bradley Cooper’s character, Rory Jansen who has stolen a story he found and printed it as his own. The main bulk of the film centers around Cooper’s torn existence following his choice, but it then dives into yet a third subplot involving his encounter with the original author of that story he stole. An unnecessary digression, hence the third story line, only adds to your confusion watching this. And yes, the film is about as confusing as that brief synopsis right there.

Despite the directors doing it with the script, I’m not going to mince my words. This film was bad. Terrible, in fact. But the storyline was interesting, although I do now recognize its glaring weaknesses. Numero uno, and as cynical (and ironic) as this is going to sound coming from another writer, the hierarchy of who rips-off-what-from-whom has got to be significantly larger than one man stealing from just one other man. When one author rips off another, unless it’s EXTREMELY high-profile stuff we’re talking about here, with prolific writers involved, we wouldn’t really see or hear about it in the news, care much less about the event happening. Hence, the movie’s significance is hindered by the ultimate question posed by a movie-goer’s ticket purchase: “why, of all things, should we care?” Indeed.

Gah!!! And it had such potential! Such potential. It’s been shown before that Cooper can turn the characters he’s been given into something pretty special, a trait that has time and time again been subtle, but just enough to bolster the films he’s starred in. Just a few that come to mind are his roles in Limitless, where he plays a struggling writer who stumbles upon a drug that can help him do everything he ever wanted to do; The Hangover, where he’s your typical middle-school teacher with a penchant for partying it up a little too hard; and Silver Linings Playbook, where he pulls off a very tough assignment playing a recently-released patient of a psychiatric hospital who’s looking to turn things around in his life, having just lost virtually everything.

The Words, however, is a slap in Cooper’s face. Due to its structure, having stories built within other stories, there’s really no room for character development, which is, I assume, why Cooper is hired primarily — he’s a strong character actor. However, the hire this time seemed to be more based on his looks than his acting repertoire. There are scenes in this movie that are painfully hard to sit through — no thanks to brilliant directing, quite the opposite in fact — and Cooper’s Rory sits there with a look on his face that mirrors our own in the audience.

What hampers this film the most, though, is the narration we’re given as we dive deeper into the layers of the film. First, we are listening to famed author Clay Hammond (Dennis Quaid), whose story is where most of our attention shall be paid — that of Rory Jensen and his struggle to find authentic, original writing. Instead of building up sufficient drama behind his troubles, allowing Cooper to express verbally all of his stress about being discovered as a writer, directors Brian Klugman and Lee Sternthal spoonfeed us the world inside Jensen’s head. And the narrative does have its place in films. Just not when they take up most of the movie’s running time. Call it lazy storytelling — at best!

Then, move beyond that and to the point where one day the troubled Mr. Jensen confronts  the person he has stolen from. Again, talk about not having to work for the money here. . .the author (Jeremy Irons) seems to hunt down Jensen from out of nowhere, with no explanation as to why or where he’s coming from. His story line is nothing if not contrived, with Irons being thrust into the frame just where he needs to be with the shake of a magic wand.

Being a viewer of this film is like being one of those kids sitting in the back row in a film editing course in high school. You’re not likely to gain a whole lot of perspective back there, and there’s really no motivation for you to move a few rows up, either. Actually — let me one-up myself here; this entire film ought to be considered an introductory course in film technique. The sheer volume of contrivance in the film (worst of all being Irons’ portrayal of that old, cranky author) gets to the point of being condescending. It is also similar to that feeling you get when you’re watching super-cheesy films your peers made for a participation grade. Yeah, you’re going to clap to show your support. Of course. That’d be rude not to. In context to this film and its considerably larger audience than 20 high school students in one room, it wouldn’t be out of line at all to walk out of it early, or to take out the DVD before its finished. Simply put, this film lost me faster than any other one I’ve watched this calendar year. 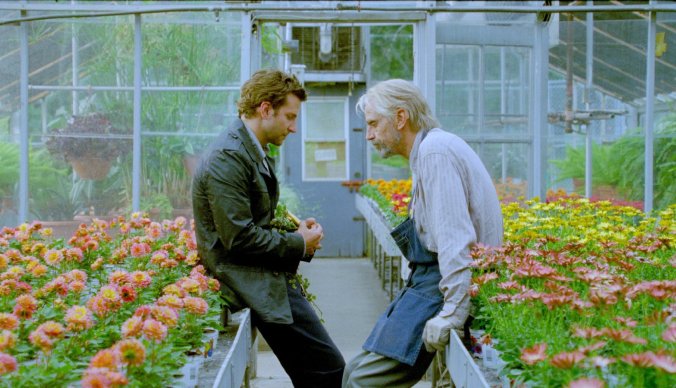 Recommendation: In all good conscience, I don’t think I really can recommend this one. To anyone. Even the most devout of Bradley Cooper fans. This one you could benefit by staying away from. The idea to structure three different lives circling around one published story in different times, different places, was a novel one. On paper, The Words looks really really interesting. But on paper, the words just ended up really sucking.

One thought on “The Words”