I don’t like to use the word ‘awesome’ all that much. It’s just, like, completely so totally not all that great to do.

But if someone would like to find me another word to use instead, I’m all ears — or fingertips, as the case may be here. Nearly every aspect of this film I loved, and it certainly was a film that spun more romance than comedy. Silver Linings Playbook is filled with its own hyperboles and emotional highs and lows, so my awesome comment kind of fits.

Bradley Cooper and Jennifer Lawrence star in your not-so-typical romantic comedy featuring two similarly mentally unstable individuals, Pat (Cooper) and Tiffany (Lawrence), who end up falling in love with each other after a most unlikely set of circumstances develop following Pat’s release from a mental institution.

Pat Solitano has recently been released after he nearly killed his wife’s apparent other love interest eight months prior, and is now living back at home with his parents (played by Robert De Niro and Jacki Weaver). Understandably concerned, his parents and those around him have all but backed off from Pat, even though he continues to insist he is changing his ways and has gained valuable insight about how to deal with his emotions. Though he’s lost his job, his house and remains under a restraining order from his wife, Pat remains upbeat, and knows eventually that he will get back together with Nikki.

But things get complicated when Pat bumps into a dark-haired girl named Tiffany. Yes, they get complicated as things always do when boy meets girl. Here I’m willing to stick to the predictable calls, because the playing field has been slightly tilted in neither protagonist’s favor, with the whole issue of mental illness inspiring and propelling the already great acting potential.

Cooper’s Pat is at times explosive, whiny, childish and most of the time filled with an unjustified tension that is convincing behavior of someone with bipolarity — what Pat suffers from. He’s not the nicest person a lot of the time. And then Tiffany is quite a nice reflection of that, with her occasional, albeit sudden, public outbursts; she also admits to her promiscuity, but insists that’s not who she is anymore, either.

Both of them are brutally honest people. Perhaps more so Tiffany than Pat, but both of them take a no-bullshit approach to interacting with others. It’s healthy for them, but healthier still for the movie. Theirs is a relationship I could buy into and hope that it not only begins, but lasts. Even if both characters remain rough around the edges, director David O. Russell handles with care, in building the relationship from a distance.

Pat’s ultimate wish is to get back with Nikki and in so doing, uses Tiffany as the means through which his letter(s) can reach her without violating his parole. Tiffany agrees to be the dove so long as Pat’s willing to help her with something in return. Her request is that Pat help her with a dance routine she’s working through to enter a dance competition. As they learn the moves, they learn about each other and eventually become good friends. But with Pat ever-determined to find his own silver lining still — if he’s patient enough and can show his wife that he is learning how to do something for the benefit of someone else and not himself — will Pat and Tiffany ever be together as couple? They seem cut out for one another, but does the timing ever quite work out?

With Pat’s parents at home driving up his stress levels — his dad, a bookie with OCD and a serious concern over his son spending time doing things that are healthy instead of self-destructive, is certainly  no help — Pat’s got his work cut out for him in his own playbook. In order to make his life work, he may have to throw out a few plays and just go with his improvisational skills. And the more Pat does, he begins to realize that Tiffany is the O to his X.

A great feat of Silver Linings Playbook is that it becomes sentimental and sweet, but O. Russell never sells those values to us. Instead, they’re earned and a kind of anxious excitement develops as the film builds. The cause: we get so invested in learning the ins and outs of how Pat thinks, how he reacts to changes, how he interacts with others. The effect: when something — FINALLY something — is going right for Pat (and Tiffany), we really do care. Damaged as these protagonists are, they’re of course deserving of the same kind of attention that others get who don’t suffer from a mental condition.

And further grounding this film in reality (and in good standing with me) is that by the end of the film you still realize these people have work to do on themselves. Work that may never end, as the case often is with mental disorders. At least now they have each other to share these experiences with. 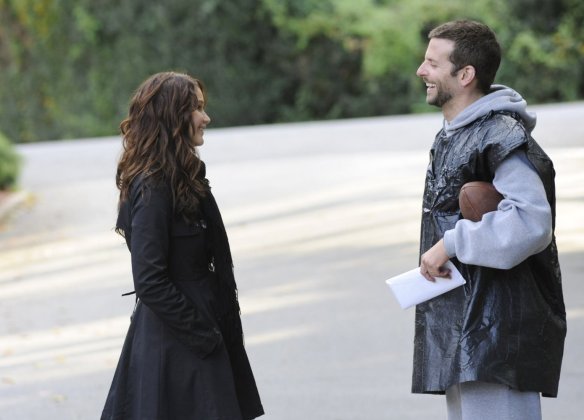 Recommendation: A great date movie, especially in the sense that it is one of the more original romance-comedy features in recent years. It may not be all fun-and-games all the time, but the reward in the film’s silver linings is well worth your patience and attention. There’s plenty of appeal for anyone who’s ever had to deal with these kinds of issues themselves, as well. A very respectful film to its subject matter, its acting department, and above all, its audience. O. Russell, well played sir. Well played.