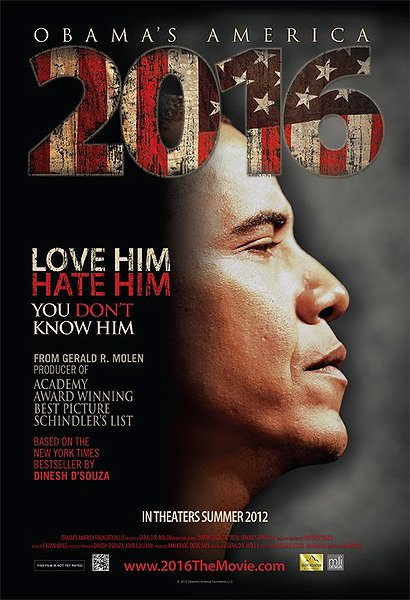 I’m hoping the motivation behind watching and then reviewing a movie like this has got to be because I like a good challenge every now and then. I’m owning up to it right now that I am not the most politically-minded of individuals out there. Nothing tunes my brain out during a conversation faster than when people start talking politics. Sure, it’s an important discussion to have. That’s why these discussions become vehemently passionate…almost always. But here I am going to try and be as objective as possible and not lean one way or another in reviewing this film because, let’s face it, there’s a snowball’s chance in hell that I will get someone to change their mind on whether America made a good decision in voting in Obama for a second term of office in 2012.

I believe that the most glaring mistake in 2016 — and in its Liberal counterpart Fahrenheit 9/11 — is there is no neutral stance taken. Denish D’Souza’s film is strongly conservative;  9/11…well, I guess I already stated it’s place on the political spectrum. The polarization of its viewers starts in the first five minutes or so, and in so doing, makes those who are on the opposite side of the fence work harder to not only understand the core objective/message but agree with it.

I’m not calling those people out who favor D’Souza here, either. There are a lot of great arguments made and disturbing information revealed throughout the course of a film attempting to predict an America four years from now, under the presidency of one Barack Obama. Some viewers argue it’s not predictability at all, but more of an eventuality. ‘Look at the numbers. An economy in crisis: the national debt since our very first President up until Bill Clinton stepped out accumulated to something in the neighborhood of $5 trillion. As Obama enters the White House for his second term, it is at least triple that number. That is horrifying.’ If this were a horror film, it would do well. Along with a rising debt crisis, America is suffering from a painful lack of employment since Obama took office. Hovering currently around 8% (though Forbes argues it realistically is around 14%) the percentage of Americans out of work since Obama was sworn in has fluctuated at a disconcerting 8-10%, numbers reminiscent of the Great Depression. Though not a quarter of the entire population, it is a problem. And there I shall step off the statistic podium. It is already giving me a headache.

But I’m not here to dispute numbers. He’s an expensive as hell President. I won’t argue the facts that this film brings to light. What I argue is why doesn’t D’Souza give equal time to those who support Obama? I mean, aside from scant street-interviews with those who once supported the President in his first term but no longer do. There’s no real face time with those who continue to support him. And the reasons why he wouldn’t interview anyone in the party itself are pretty obvious. Every interview he conducts is anti-Obama, and it seriously starts to get annoying. Even harder to believe that D’Souza is trying to convince anyone that America is in as deep a pile of trouble as he is forming with his words, his script, his camera crew.

Unless you were already subscribing to the notion that Obama is trying to draw the United States back into the political and economic Dark Ages, you would otherwise think nothing different. Had he taken the time to provide insight from those who are in high profile positions who might speak favorably of the President, there would be balance between both parties and a far more formidable argument would have been formed. I, for one, would then have to sit back and listen to the rhetoric (and facts) from both sides, and subsequently take the time on my own to differentiate that which is true and accurate from information that is largely based on scare tactic scriptwriting and fear-mongering filmmaking. Without the liberal view, we get just the latter. We have absolutely no frame of reference and almost are forced to take the narrator’s words as truth serum.

And I believe the same applied to Michael Moore’s film on the whole post-9/11 war on Afghanistan agenda. Well, first of all, I actually despise that man to begin with. D’Souza, I appreciate: the intelligence, the control he has of the film, and his general composure are hard to dislike. However, both men are unfair to their source material. This may be the first and only time I ever review a film like this since it is difficult to access the middle ground that I always try to reach in movie critiquing. That’s alright, I suppose. America is the land of the free and the home of the brave. D’Souza has every right NOT to include the other side of the argument in his work. Should he have, though? Absolutely. Perhaps what is most frustrating of all is D’Souza had a perfect opportunity to create that space: the DVD special features. There are none. 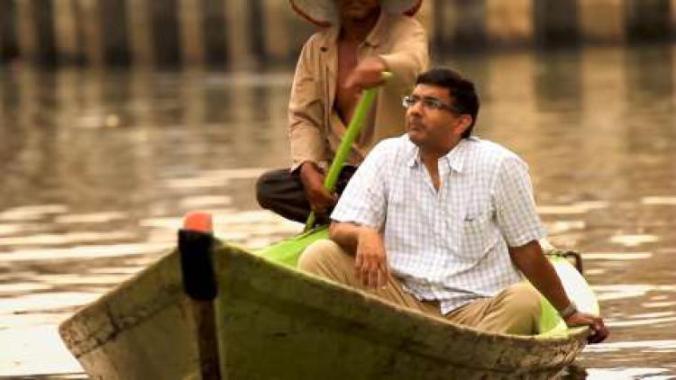 Recommendation: A film everyone needs to see, no matter your place on the political spectrum. I’m kind of astonished it took me this long to see it. Now that I have, I’ve got a few more things to think about, whether positive or negative. And again, I am one of the least politically involved individuals that I know of. Shame on me.