Jeff, Who Lives At Home may be as skimpy on the scenes/shots as a filmmaker may ever want to go without having to possibly reconsider his career in full-length features. With this new Duplass story, we meet, greet and then leave in under 80 minutes — if you don’t include end credits.

In that way, Jeff really is paced like a semi-tragic short story, a novella of true novelty. Its the story of a strange 30-year-old man-child who lives in his mother’s basement and has an (endearing) obsession with things being universally connected. One day his mom calls requesting that he do her a solid and run to the local Home Depot to pick up some wood glue for a broken kitchen item. In the course of trying to accomplish the one task, Jeff gets distracted.

Segel’s character is a man of depth, to say the least. The movie is constructed so that it catches him at all the coincidental (or not) moments which enable him to think that things are all happening for a reason. An angry caller with the wrong number (or, again, is it?) keeps asking for someone named Kevin. Confused, he hangs up but Jeff’s left wondering.

Along the way we bump into Jeff’s older brother Pat (Ed Helms) who looks like this the entire time:

A strung-out paint store employee, Pat’s a night-and-day difference from our main man. His marital woes are obvious: he’s impulse-bought a Porsche — as one does to enhance their love life. Jeff and his brother become entangled en route to finding the ever-illusive ‘Kevin’ and in the process, Pat wrecks his idea of marriage into a tree.

An act of the cosmos? More hilarious than anything, really. This movie is like watching a game of catch. Perspective seems to keep shifting back and forth between Jeff and Pat, one an idealist the other a realist. The idea of the movie is actually somewhat profound but in my view the underlying ideas aren’t as fully realized as they maybe could have been. There’s great acting, however, that should not go unnoticed. Susan Sarandon as the boys’ mother, her own emotions fragile after the passing of her husband, is wrapped up in an affair all her own, adding another twist that was downright weird.

Still, just to watch Jason Segel manage to hold back most of his goofy, school-of-Seth-Rogen chuckles is more rewarding than you might expect, even if How I Met Your Mother and Freaks & Geeks are Segel’s stomping grounds. 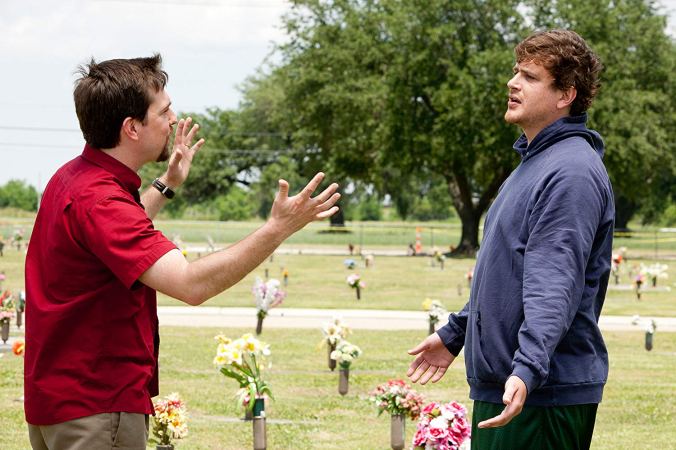 Recommendation: Worth watching for the young and the awkward. This was a neat little addition to the so-called “mumblecore movement” and a welcome distraction from megalithic/awesome/phenomenally huge wide-release superhero action franchises.

One thought on “Jeff, Who Lives At Home”