I’ve been a guffawing fan of MacFarlane’s Peter Griffin for a long time now, so it was a natural transition for me, from apartment to car to Regal Cinemas West Town; even though I’d be seeing it quite after-the-fact. Still, entering the theater and leaving this one came with some strings attached: you gotta know what you’re in for…

Seth MacFarlane makes his debut on the big-screen with Ted, what’s being proclaimed as THE comedy of 2012. There should be a dot-dot-dot and then ‘so far’ with that, but we don’t get that in the tagline for this movie and maybe we shouldn’t. This is a strong, hilarious introduction for the funny guy who’s the brains behind the Quahog operation on Adult Swim; a show, by the way people, that’s simply a batch of goofy fart jokes, infantile crude humor and amazingly timely (if not damn offensive) one-liners. Does it make sense, then, to assume the first film from its creator would be anything different?

I’m not saying that’s a bad thing, by the way.

As a child, John Bennett (Wahlberg) fulfills a wish that his stuffed bear, Teddy, would have a real personality so they could be friends forever. And so they grow up together being inseparable buddies, which yes, does come to serve as a point of no return for Mark’s future, and beautiful girlfriend Lori (Kunis). That being said, the stuffed animal causes more havoc and whoops more ass than a hurricane it seems, and possesses a worse mouth than Howard Stern himself. Remaining lovable, though, Ted does indeed come to realize that the meaning of ‘forever’ has to be shortened sometimes despite his repeated antics in trying to keep his owner around.

There are no plot twists or scratch-your-head moments in Ted, but it does in fact have a heart (though it may pump more testosterone than blood through its soft little body) and the characters are all likable — minus one jackass (Lori’s boss). It’s unlikely that people who come out decrying this movie are fans of the show(s) either, or at least have seen enough episodes to get used to this man’s brand of humor, but it’s also safe to assume that there could have been worse coming from Seth MacFarlane in a full-length feature.

Mark Wahlberg is great (and very Bostonian) in this movie, as are Kunis and MacFarlane — who’s only had to tweak his Rhode Island twang a tad to fit the bear. Oh, and Giovanni Ribisi’s pedophiliac comic genius apparently needed to be exploited sooner; he’s …. wow.

This is the Family Guy movie we needed. It’s the Griffins, just not in animation. Unfortunately there’s no Cleveland, but there’s a talking stuffed bear for God’s sake. I suppose the highly detestable Rex could be the closest we get to Quagmire?

It’s no blockbuster, but it’s pretty much what we needed from these guys, and there are painfully funny scenes. So grab your thunder buddy and check out Ted in a theater near you! 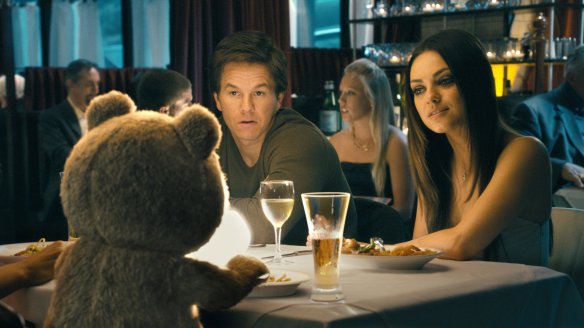 Recommendation: It beats sitting at home watching re-runs of Family Guy on lots of channels. This has freedom to run with more jokes, more insensitivity and more beer-chugging and bong-ripping, yet has more time also to redeem those moments. Mila Kunis does stick around, after all. And that, was a spoiler alert.