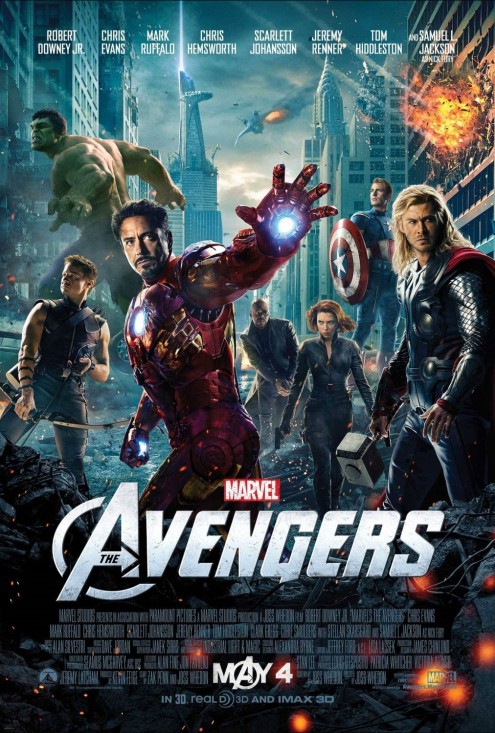 So finally I am getting around to scribbling out a review for perhaps one of the most successful movies to come out of Hollywood in….well, history. I figured I would treat this one just the same with all my movie reviews and instantly churn one out the next day, but giving me some time to allow the movie and the buzz to resonate a bit more should help me maintain at least a little bit more objectivity. It’s going to be difficult on this one, regardless.

Director Joss Whedon really outdid himself on the Marvel’s The Avengers, destroying all other box-office weekend contenders with Thor-like strength, grossing $207 million opening weekend. And while that’s old news now, the popularity of this film keeps growing. Sales at the box are now at $457 million since the beginning of this month. That is almost unheard of….or, perhaps it’d be easier to fathom this had a name like James Cameron been attached to the project. Mr. Whedon’s baby is, while not at the top anymore, sitting comfortably at the fourth-highest notch on the all-time grossing list. Considering the company (Harry Potter and the Deathly Hallows Part 2, Titanic, and Avatar), there’s nothing to be ashamed of coming in fourth. Even Ricky Bobby should be able to handle that fact.

What I thought Whedon accomplished in The Avengers was to extinguish my biggest fear about it: how to tie the various, seemingly unrelated and complex emotional landscapes associated with each superhero into a unified, logical plot; one that would not require an intermission, either. I’m sure I was not alone in that regard.

You have Tony Stark, a man with a brain, but also a metal heart whose ego knows not where to draw the line; Bruce Banner who warily refuses to cross that line, because when he does things go very, very bad; and two embattled gods (Loki and Thor) fighting for possession of practically everything and all that matters (one of whom is a very skilled sorcerer/psychopath and loathsomely jealous of his brother). The rest of our heroes are a shade of gray different from these guys, and it would be a logistical nightmare on paper to try and get them all to play nice.

However, Whedon, along with an excellently written script, combine essentially a “Best Of” each hero (and villain), providing for sufficient and substantive on-screen time for each character. While I still believe Iron Man steals most of the show, there are humorous moments throughout, and there are even some universally hilarious moments that happen which really don’t have much to do with the main plot. It’s the perfect action movie, particularly if you’re in possession of stacks of Marvels comic books under your bed.

On top of that, Whedon manages to turn the plot at a critical moment: Loki is held captive on board the Avengers’ floating home base in the sky and in the short time that he is there, he manages to disrupt and create turmoil within the band of heroes — beginning with the increasingly vulnerable Banner/Hulk, moving on to Natasha Romanoff, a.k.a. Black Widow (Scarlett Johansson) and so on and so forth.

Our heroes start exploding……or maybe imploding is more appropriate. Alas, the ultimate test: are the Avengers really just a bunch of people — scared, confused and powerless as a group? Or can they truly unite and do good for a world threatened by an impossibly angry god with a horned helmet?

If you haven’t already done yourself the justice of finding out the answer, I fully recommend you do so. Soon.

Recommendation: This movie has wide appeal, another tightrope I believe Whedon was able to cross safely in taking on such a project. You’ll most enjoy it if you have indulged in the comics as a kid, but that is definitely not a requisite for this bad boy. Go experience it.

8 thoughts on “Marvel’s The Avengers”